“While this may seem like an overly cautious approach to a cluster that isn’t yet as big as we’ve seen in other places, I think it’s a wise move,” writes Catherine Bennett. 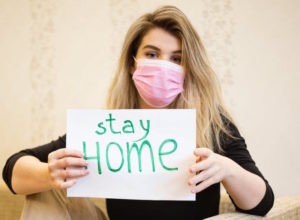 From midnight today residents were be asked to stay in their homes. Hospitality venues were shut, also schools and universities. Construction will grind to a halt and exercise won’t be allowed outside the home.

The only permitted reasons to leave home are to shop for food or medicine, or for essential health care. Elective surgery will be paused, except for urgent operations.

There are now 22 cases linked to the cluster that emerged from hotel quarantine, and a further seven suspected cases.

While this may seem like an overly cautious approach to a cluster that isn’t yet as big as we’ve seen in other places, I think it’s a wise move.

This is how lockdowns should be used. Indeed, the World Health Organization advocates lockdowns as a way to buy precious time while other essential public health measures are mobilised, such as contact tracing and widespread testing. The focus here is on preventing a rise in cases, unlike the lockdown in Melbourne where the cases had already taken off widely in the community and it was about turning the wave around.

We’ve seen the virus in this particular cluster spread very rapidly. In just two weeks it has spread through five generations — that is, to five “rings” beyond the initial case.

We’ve also seen cases passed on through quite casual contact, via a pizza shop in the suburb of Woodville.

“This particular strain has […] a very, very short incubation period. That means when somebody gets exposed, it is taking 24 hours or even less for that person to become infectious to others, and the other characteristic of the cases we have seen so far is they have had minimal symptoms and sometimes no symptoms but have been able to pass it on to others,” said the state’s chief health officer, Nicola Spurrier.

This short incubation period and rapid spread is why the government has opted for a six-day lockdown, giving the space to put out the spot fire while protecting the wider community, and especially high-risk settings and vulnerable populations where cases numbers can escalate rapidly with serious consequences.

Also, as Spurrier said, the cases so far have had no, or very mild, symptoms. So this six-day window allows the testing of close and casual contacts to be completed so the cases that are out there become visible to the health department.

The decision to restrict exercise altogether is strict, but warranted in my view. The rationale is similar to putting a wide range of people into isolation, as they don’t yet know where the edge is of the current cases, or the full extent of exposure. The rationale for the extension of restrictions beyond Adelaide and surrounds to the whole state is less clear at this stage.

If it protects the population from an escalation of cases, then six days without outdoor exercise will ultimately be better for physical and mental health than longer strict rules, even with some exercise allowed.

Significant restrictions will remain after the six days, but not full lockdown, according to the state’s Police Commissioner Grant Stevens.

The good news is there have been no mystery cases so far. All positive cases have been linked back to hotel quarantine at the Peppers Waymouth Hotel (known as a “medi-hotel” locally).

Testing rates have been very high. Some 5300 tests were done on Monday, and more than 6000 on Tuesday. This number of tests is comparable to three or four times that number in a larger city like Melbourne. Local residents have been very patient in queuing up to get tested, sometimes for several hours.

SA’s contact tracing team hasn’t really been severely tested during the pandemic. But the team has received extensive training and is reportedly robust, having been given the tick of approval from chief scientist Alan Finkel’s recent review into Australia’s contact tracing, published on November 13.

More than 4000 people have been quarantined already, including not just contacts, but contacts of contacts, and even beyond that to ensure “casual contacts” are also followed up and tested. This is a sign of a rapid and strong public health response.

What needs to change?

Before this cluster, testing was not mandatory for hotel quarantine staff — although this has now changed to compulsory weekly testing.

This is a positive step, but in my view we should ideally start testing hotel quarantine staff daily.

Getting a nasal swab every day is quite intrusive, so I think we could use saliva tests instead. Yes, they don’t have quite the same level of sensitivity as the “gold standard” PCR tests based on nose and throat swabs, but they’re more tolerable for frequent testing.

Saliva samples can also be efficiently managed if pooled together, and if there’s evidence of a positive test in the broad sample, individual samples can then be checked. Testing early and often is the best approach.

We also need to get serious about resourcing our hotel workers. Spurrier confirmed some workers had worked at multiple sites. This obviously increases the risk of the virus spreading through the community — we saw this with some aged-care staff working across multiple venues in Victoria.

We need to prevent workers from needing to work across multiple sites, by paying them more. Even if they’re not working full-time, they need to be paid as such to ensure they don’t need to take on extra work and increase the risk of spreading the virus to other workplaces. This goes for all staff — security staff as well as cleaners. Cleaners have a very important job and are particularly vulnerable.

I’d like to see national guidelines crafted for hotel quarantine. Today there is national agreement on weekly testing, but I think this should be a minimum. Infection control protocols and monitoring, and pay rates with accompanying sole employment rules also need to be considered. It’s an issue that isn’t going to go away, and it’s an important gap that needs to be filled.

Catherine Bennett is the chair in epidemiology at Deakin University. This article was the originally published on The Conversation.

Helen Musa - April 16, 2021
0
There's a buzz around the national capital and, it's hoped, the nation, with news that Canberra-based theatre guide and ticketing platform, Stagecenta, has released a theatre-specific app.