“During this crisis, maybe our local members could regain some trust, honour the values we expect of them and step forward to do all they can to stop such planning stupidity,” writes “Canberra Matters” columnist PAUL COSTIGAN.

AS the ACT’s state of COVID-19 emergency gets tougher, people look to those in authority that they should be able to rely on – those they want to trust.

Trust in the ACT’s Greens/Labor government is as low as it can get. The government’s use of spin and avoiding questions has been perfected to the point where the government, both the politicians and their key bureaucrats are viewed as being from another planet – another reality.

People reluctantly accept that ACT politicians attain their position through their connivances within their own political parties and then through the way the electorate processes favour these larger parties.

We enter this extraordinary tough time with these people as our leaders. Like it or not we have to turn to these individuals who are now in life-changing positions of authority. Do leopards change their spots? The reality is that we have no other option than to be optimistic.

But having that little bit of optimism is not helped by the emails now circulating about current actions by the government’s notorious planning directorate.

Acting on behalf of Planning Minister Mick Gentleman and the Minister for Social Housing, Yvette Berry, residents have been stunned that the Planning Directorate has adopted the “business-as-usual” model for how they deal with residents during this crisis.

Residents discovered yesterday (March 22) that this planning directorate had quietly plonked a development application notice on to their website for the very contentious construction on the south-east corner of section 72 Dickson of Common Ground, a social housing apartment complex.

The only people informed were a handful nearby businesses and residents – as if the rest of the inner north had no interest in this proposal.

The details of what is so wrong with this project have been the subject of many media columns and submissions. To repeat the basics. This is not about opposition to social housing in the inner north. This is about this style of apartment complex, called Common Ground, not being the best use of money, and about the desperate political decision to choose this site despite it being totally unsuitable. It would be impossible to publish here the long list disingenuous goings-on within the planning directorate over this development.

This latest sneaky move must be as low as one could imagine this directorate could go. Transparency and honesty are not values being practised.

A similar level of trickery is at play in Weston where the government is pushing ahead to bulldoze trees and a park for a carpark. This is their stupid solution to the car parking issues around Coleman Court that have been caused by the non-delivery of supermarkets to the nearby new suburbs of Coombs and Wright.

The trick being played out is that the car park is to be classified as a temporary car park. This allows the government to get around its own planning rules that would otherwise not allow this open space to be turned into a car park. So much for the commitment to green infrastructure and climate change.

This is the government we now need to trust!

The planning decisions described above signal how this government thinks and acts.

One wonders whether there are any planning bureaucrats left in the directorate who are prepared to call out their seniors for carrying out these stupid actions.

During this crisis, maybe our local members could regain some trust, honour the values we expect of them and step forward to do all they can to stop such stupidity.

Local members have not been known for being in touch with the aspirations of residents. Now is a good time for that to change.

A crisis can be life changing. People desperately need to have trust in their politicians. 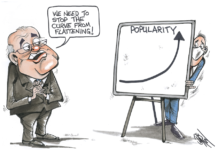