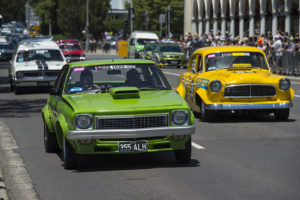 SUMMERNATS has been cancelled for this summer and won’t be back at Exhibition Park until 2022.

ACT Health is using Exhibition Park as a COVID-19 testing facility until the end of November and can’t confirm if Summernats will be able to use the venue.

“Combined with ACT Health’s recently released protocols that exclude outdoor multi-day festival events of more than 5000 people, a pathway to a January Summernats is impossible,” he says.

“We’ve fought really hard for our event for the last six months, but we just can’t find a way to get it over the line. Our team is very disappointed, the street machine community is devastated, and the same goes for our loyal staff, contractors, and the accommodation, hospitality and associated businesses that normally benefit from the $30 million the ‘Nats brings to the ACT economy every January.

“But everyone across Australia is suffering, and ACT Health and other agencies are doing their best to keep everyone safe. We respect the great job that’s been done to get the ACT to such a good position.”

While Summernats attracts more than 100,000 auto fans and 2000 vehicles to Canberra’s Exhibition Park each year, organisers will instead be staging a reduced capacity Summernats-style event called “Summernats Rev Rock ‘n’ Roll”  in March as part of their national program of covid-safe events.

“The Summernats isn’t in the doom and gloom business, we’re in the good times business, so we’re moving forward and announcing a calendar of exciting, covid-safe events for 2021,” Mr Lopez says.

CityNews - October 21, 2020
0
AND the outlook for summer? Expect to see above-average rainfall and severe thunderstorms in the ACT over the next few months, the Bureau of Meteorology tells reporter DANIELLE NOHRA.