Summernats take the summer off, the (other) great election debate was a rather wooden affair and how many Grandparents Day do the Canberra Liberals want us to have? It’s another “Seven Days” with IAN MEIKLE.

THE prostitutes of Canberra may be moaning for all the right reasons at the news that January’s Summernats has been cancelled, but there will doubtless be satisfied smiles around Watson and the inner north.

The long-suffering neighbours have (fairly) stoically endured more than two decades of summer noise and disruption from the annual performance-car festival that draws 100,000 visitors to Exhibition Park and, it claimed, $30 million to the local economy.

The dog-in-a-manger directorate has testing booked until the end of November and can’t (won’t?) confirm if Summernats will be able to use the venue.

“Combined with ACT Health’s recently released protocols that exclude outdoor multi-day festival events of more than 5000 people, a pathway to a January Summernats is impossible,” he says.

So it’s off until January, 2022, with the consolation of a reduced-capacity event called “Summernats Rev Rock ‘n’ Roll” in March.

AND in politics, the grinding election campaign took on a spark of life with the Leaders’ Debate at the National Press Club (on the same day as the dysfunctional American one).

Leaders Andrew Barr and Alistair Coe were decidedly stiff and civil during the hour-long broadcast on the ABC.

Full marks for the high standard of moderator Adam Shirley’s incisive and thoughtful questions. Wasted, of course, on the aspirants, who slipped easily into set pieces, despite Mr Shirley’s haplessly urging them back to the point of his enquiries.

The Labor leader glistened under the lights, which didn’t help with bolstering integrity as he struggled to explain away Labor’s failure in health, education and Aboriginal welfare. Despite affirming the promise of a million trees (in 10 years), the Liberal leader wobbled on climate change, despite some credible bluster.

I think a lot of viewers might have been surprised at Coe’s poise and growing confidence. He looked straight down the barrel of the camera and, against the expectations, seemed to take control of the argument in the second half of the debate.

Barr, a normally consummate media performer, looked nervous and a bit on the defensive.

It was obvious Coe was media coached within an inch of his life, but once he’d cast off the how-can-you-pay-for-promises question (how can either of them?), he hit his stride talking families and cost of living.

Inexplicably, I became transfixed by his eyebrows and lost a little concentration wondering if they’d been subject to modern grooming. I haven’t troubled his busy press office with an enquiry, but he did well.

THOSE young and aspiration people at Canberra Liberals’ HQ may be pleased to know a “CityNews” reader has found a way to relieve them of at least one of their unfunded promises – Grandparents Day.

The Libs announced GD with some gusto amid an action plan to protect older Canberrans from elder abuse blah blah and promised to “work with community organisations to launch new initiatives”.

Liberal spokeswoman for seniors Nicole Lawder said Canberra families and the community were greatly enriched by the contribution of grandparents and the day was “a small initiative to honour and celebrate their important role in people’s lives”.

Too true, Nicky, but clearly you haven’t been paying attention. According to my inner-north snout, the ACT’s inaugural Grandparents Day was first held on Sunday, October 28, 2012!

The then Minister for Ageing, Joy Burch, said the idea for ACT Grandparents Day, which is held on the last Sunday in October in the ACT, nationally and internationally each year, stemmed from feedback provided following something called an Older Persons’ Assembly.

“A key message that was delivered to the ACT government from delegates who attended the Older Persons’ Assembly was that older people deserved a greater level of respect and the right to feel more valued within our community,” she said at the time.

This year’s is just a week after the election, on Sunday, October 25.

“HOW many are you allowed to have over for lunch?” is the title of this spontaneous photo taken in Civic (on an iPhone) by Sabine Friedrich.

Everyone in Canberra has a magpie story (I’ve got four) and Sabine’s is that she got swooped a few times crossing Glebe Park going to and from work. On the advice of the Reid postie, she bribed the swoopers with pumpkin seeds. Then they waited for her to cross. The big test was that after months away overseas, they still remembered her. Pumpkin seeds, there’s the clue for next year! 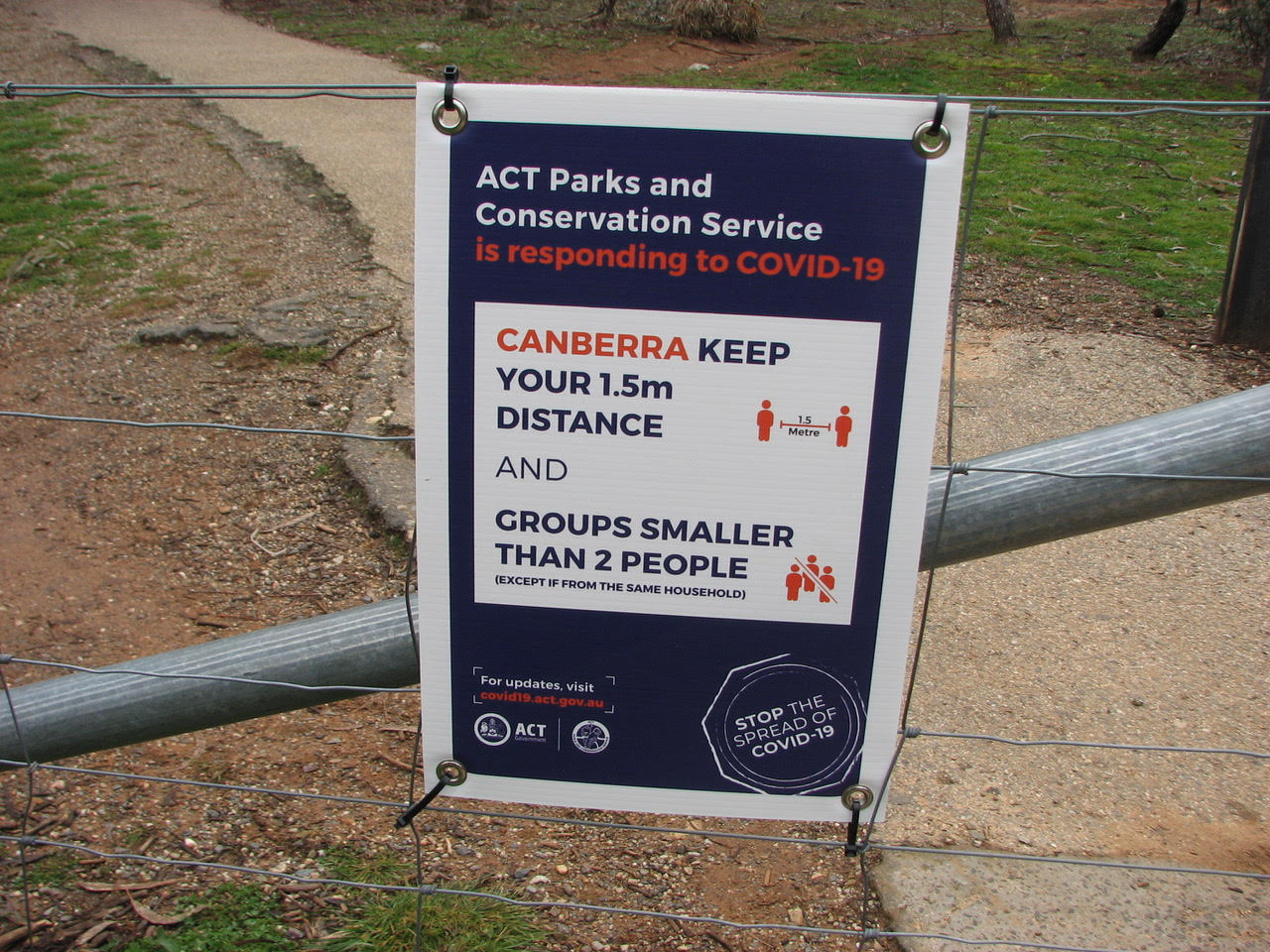 PETER, of Bruce, writes to say this sign, at the AWM entrance to the walking track to the top of Mount Ainslie, begs the question: “What is the smallest number you need to comprise a ‘group’?”