TUGGERANONG has the most confirmed coronavirus cases in the ACT, according to a map launched on the ACT government website this afternoon (April 9).

Out of the 101 confirmed COVID-19 cases in Canberra, the Tuggeranong area has recorded the most, 23 of them, with south Canberra not far behind on 17.

Gungahlin has 15 confirmed cases, there’s 13 in Belconnen, 12 in Canberra’s north, 11 in Woden Valley and Weston Creek has seven. 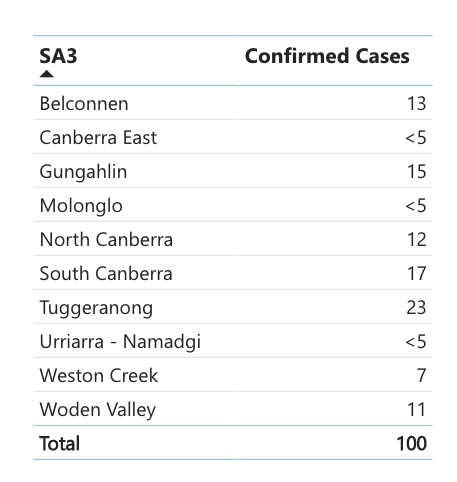 The smallest confirmed cases are in Canberra’s east, Molonglo and Urriarra/Namadgi, which are all have less than five cases.

The map, which is now live at covid19.act.gov.au, shows the number of people with confirmed COVID-19 in each area, based on their usual place of residence at the time of testing. The website says the locations may not be where the person was infected.

There are currently 101 confirmed virus cases in the ACT (with one yet to be added to the tally) and of that 54 cases have recovered.