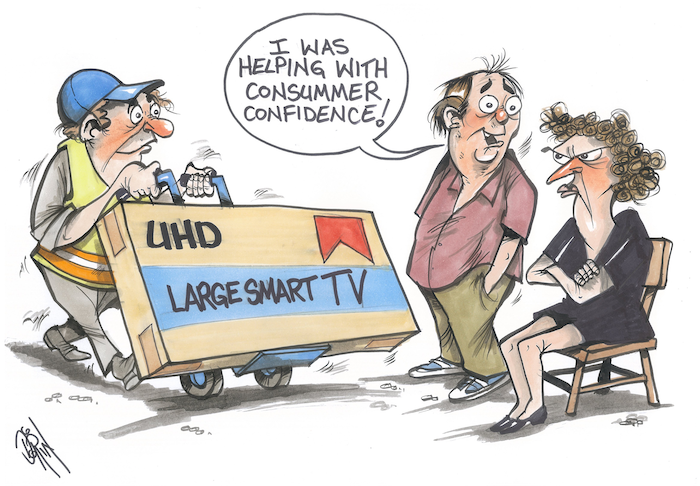 WENDY MACKLIN gets a taste of technological triumph when she masters the off switch of a new hi-tech television set!

LAST night I experienced a technological triumph. I turned off the television.

This was not just any old TV. Oh, no. We had worn out the old one during isolation and decided to upgrade. Our son did intense research and we now possess the latest, thinnest, blackest and almost biggest set that is available in the modern world. It came with three instruction manuals that were completely incomprehensible, three remotes and something called a “Sound Box”.

Naturally, he had to do the installation and promised to explain everything, which is why you have children. Their technology prowess almost makes up for their teenage years. We went out. He phoned wanting a screwdriver, which I thought was a strangely old-fashioned request and then much later, summoned us home.

When we walked into the small living room I nearly fell over with shock. The entire sideboard was engulfed and the sun that used to blaze through the kitchen window, was now blotted out.

“I had to get this size for the very best reception,” he said proudly and began to instruct. I ordered my brain to focus because I did not want to be one of those silly old farts who don’t understand anything modern.

I did take note of the long, thin remote that he waved at us like Harry Potter with his wand and said was only to be used for “on” and “off’. However, when he began to work down the list of HDMIs I began to drift and by the time he reached HDMI IN 3 e ARC/ARC I was gone.

Of course, you don’t absorb anything unless you are motivated, interested and practise. I had mastered the advanced technology of my new washing machine and latest dishwasher in 10 minutes. All my favourite television programs could be accessed through the free-to-air all channels. “Antiques Roadshow”, “Hard Quiz”, “World Championship Ice Skating”, “Selling Houses Australia” and “Landscape Artist of the Year” were easy and familiar.

But I forced myself to listen again because knowing how to record the lifestyle programs and be able to whizz through the millions of advertisements, would surely add to my quality of life. Sadly, I had missed that information.

However, my husband had not wavered in his concentration because he regards the mastering of the latest technology as akin to getting up the hill at Iwo Jima, planting the flag and ending World War II.

And I must say that this man who can’t work the washing machine or the dishwasher, was awesome. We watched the ABC and SBS first and the reception was so amazing I saw that Dr. Norman Swan had aged through the pandemic, Laura Tingle had fingernails shorter than mine and when the Ginger Nut was giving a sunny press conference, I could see right through his hair. Then we went to Netflix to watch the gripping British series “Bodyguard”, then back to Channel 9 to record “Have you Been Paying Attention?”, zoomed over to SBS Streaming , back to “Media Watch” and finally, “Hyper” which is short, without the ads and a laugh before bed.

This wasn’t as easy as it sounds and at one stage, an instruction manual went flying and knocked over a mug. But at last, with a satisfied sigh, he waved a remote at the TV and staggered off to the shower. But wait a minute – the set hadn’t gone off. Down in the right hand corner were flashing lights and techno jargon which meant “systems still running, you idiot!”.

“I can do this!” I told myself rummaging through the battered manuals, woolly bed socks, Milo dregs and orange peels on the coffee table. Under the cheese-and-crackers plate was the long, thin remote. I grabbed it, pointed, pressed. And the monster screen went black.

Well, it wasn’t Iwo Jima, but in these testing times, it’s important to enjoy the smallest triumph.