As pre-polling looms, the major parties are starting to fire policies and promises into the election mix. And then there’s the tram… here’s another “Seven Days” with IAN MEIKLE.

ANYONE who thinks the ACT election campaign is a fizzer isn’t paying attention. Things are heating up as the finger pointing, rebuttals and policies from the big boys are starting to emerge.

The policy muscling up – think trams, education and health over this past week – may have a lot to do with pre-polling opening on Monday (September 28).

Trams to Woden finally came rattling into view. Behind the scenes the reality for Labor, given the debt do-do they’ve plopped us into, is that they want us to believe they want to do it, but can’t admit we can’t afford it.

In the Liberal cloisters, Crew Coe can taste that vital third seat in Murrumbidgee, but don’t want to commit to laying tracks any time soon.

But reality is a poor substitute for political spin and Labor leader Andrew Barr, when asked if the tram was an election issue, told “CityNews” political hackster Belle Strahorn: “Not with the same level of intensity as it was in 2016 and possibly 2012.

“We built Stage 1 against, arguably, a very strong force of opposition, I think it’s less so this time around and people do want to see the network extended and we will do so but in a prudent and sensible way.”

In the next term of government are you committing to the planning or the construction of the tram or both?

“Both. A re-elected Labor government will put the construction stage of the project out to tender once the relevant Commonwealth and ACT planning, environment and heritage approvals are received.”

And the cost? $1.9 billion? Can Labor afford that in the next term?

“Yes. It is already in the Budget forward estimates for the next term.”

So Labor’s in at any cost, while the Libs want to conduct an independent inquiry into Stage 2A and 2B, and shook the tree saying they’re also looking into where the next route should be built as part of the inquiry.

This set Master Builders ACT CEO Michael Hopkins fizzing: “A last-minute change to the route for Stage 2 of light rail will set back construction of the territory’s largest infrastructure project by years.”

Then to top things off, up pops Belco Bill as the “voice of reason”.

“I again call on the ACT government to immediately delay the next stage of light rail because of the economic slump inevitably coming after the COVID-19 crisis and because of the huge cost blowout,” says Belco Party candidate Bill Stefaniak, arguing for vital services such as hospitals, schools and programs that employ local businesses and people.

But ever the lawyer, Bill lobbed this in: “If new tram lines are to be built, the first priority must be Belconnen to Civic and on to the airport.” 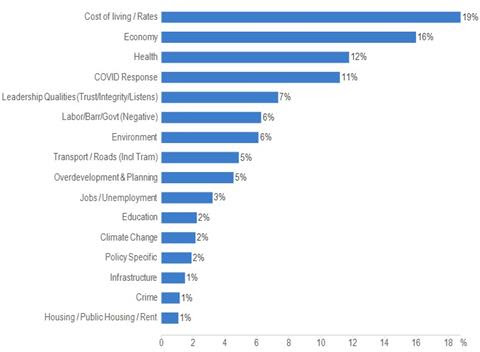 CLUBSACT attracted more than 1300 responses to a private political survey of what issues were most important to ACT voters, with CEO Gwyn Rees teasingly describing it as “Canberra’s largest non-published poll”.

He’s promised to write to the major parties to ask how they will be addressing the survey’s key issues, but won’t say what they are.

However, despite the poll asking a multitude of political questions (I know because I did it), Gwyn does open the folder slightly on one big question: “What single issue will have the biggest influence over how you will vote at the upcoming ACT election?”

As the bar chart above shows, concerns around the cost of living, rates and the economy were top of the pops, but interestingly there, at number six, was negative concern about the “Labor/Barr government”, rating voter dismay with this lot ahead of concerns about the environment, planning, transport, education, employment and crime.

WHEN the editor steps into print he’s always fair game for the colleagues he edits. And the scrutiny can be very exacting. In last week’s column I reported on the Greens being quick (“as night follows day”) to complain about the environmentally unfriendly corflute advertising signs. Up pops a cheery email from political flack and “CityNews” music critic Clinton White: “Ian – day follows night. Read Genesis 1:1-3”. Bless him.

AND some political news with a happy ending: Labor MP for the seat of Canberra Alicia Payne and partner Ben Phillips have announced the birth of daughter Elena Patricia Phillips, weighing 3.48 kilograms. She is sister to a “very excited” Paul.