The future, it seems, was in the stars, there in the horoscopes of this paper, but everyone missed it… it’s another “Seven Day” with IAN MEIKLE.

WELL, we can’t say we didn’t see something coming, even if we didn’t know it was to be the coronavirus.

We, for the purpose of this argument, are readers of “CityNews”.

I had been pondering the size, speed and shock of COVID-19 and how it caught everyone napping, hadn’t it?

Almost everyone. But not the “CityNews” astrologers. I went back and lo, in January our weekly astrologer Joanne Madeline Moore says this in her predictions for 2020: “Uranus continues its transit through Taurus. Uranus is the planet of revolutions, disruptions, shocks and changes; whereas Taurus rules money, the economy, banks and material possessions.

“So prepare for financial, real estate and stock market instability in 2020, which could result in a global recession.”

But there’s hope. She writes: “In December, Jupiter and Saturn transit into Aquarius, the sign of freedom, equality and humanity, which will usher in a progressive mini Age of Aquarius.”

And more: Neil Somerville, in his annual Chinese New Year horoscope in February said the Year of the Rat will be “celebrated in great style”. Maybe not in Wuhan, Neil, but he was on the money in the next sentence: “A lot is set to happen this year with events having far-reaching consequences”.

ONE of them is the loss this year of Floriade, a month-long favourite with ratepayers from mid-September that celebrates spring with oodles of tulips in Commonwealth Park.

It must have been a lousy, though sensible, call to make, especially given there’s a million or so bulbs somewhere with our name on them. But there’s a gift in everything and the Chief Minister Andrew Barr tells us the bulbs are to be planted all around Canberra during winter for a city-wide flower show in spring. Who knows, it might prove a brighter experience than having them all down by the lake.

LESS happy was Our Glorious Leader’s growl at superannuates sloping off to self isolate at the south coast. Mr Barr described it as “extraordinarily selfish” because of the risk of spreading the virus and there being a lack of health resources there.

Our website (citynews.com.au) went bunta for days drawing out a reasonable response from columnist Robert Macklin, sheltering in Tuross, who given an acute respiratory condition, says he’s way safer on the south coast. His column is here.

Another chum toughing it out near Mollymook wrote to say: “Sitting in my home-away-from-home reading Robert Macklin’s column, I feel vindicated for deciding to self isolate here.

“I contemplated putting a little mud on the number plate, but no need. Everyone here is very friendly – at least at a two-metre distance.

“Waving a friendly hello has become an observing pastime.

“In the hopefully unlikely event we get sick and our local doctor is swamped (unlikely – no queues here) I doubt we’ll run the Canberra triage gauntlet. Sydney is our backstop, but not Bondi hospital (is there one?).

PEOPLE do seem friendlier when I’m out walking the block. I’m getting way more smiles than I used to and I noticed this message on the footpath. Normally graffiti makes me snarl, but this brought a grin. 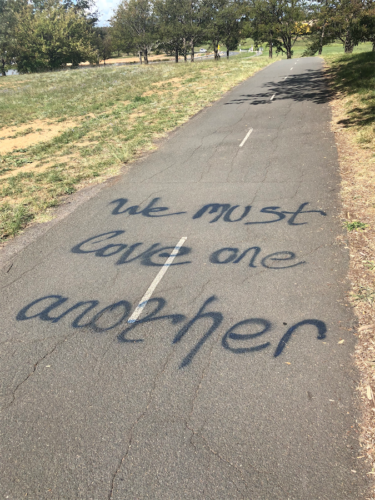 I KNOW you’re aching to know; what burns the most calories when you’re trying to stay fit and healthy at home? Dancing video games apparently do best per 30-minute sessions – 240 for men and 209 for women. Unsurprisingly, meditating uses only 33 calories for men and 29 for women. Alas, sex is pretty useless too and knocks over only 60 calories for men and 53 for women. Given the average time of lovemaking for Australian couples is 12.2 minutes, it’s hardly worth the effort, calorifically speaking. 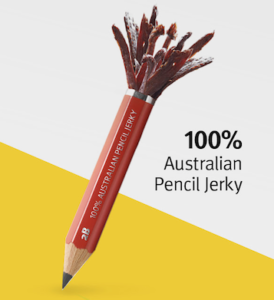 THAT Fyshwick advertising wag and would-be politician (if only we would elect him) Tim Bohm popped out an extraordinary offer of a chewable pencil with lead at the pointy end and beef jerky the other (pictured). “How do you let your creative juices flow without ruining your pencil,” Timbo asked? The answer – a 100 per cent Australian Jerky Pencil. I thought he’d taken leave of his senses until I noticed the asterixed small print saying the offer expired noon, April 1.

CONTENDER for the customer-service-in-times-of-crisis award would have to go to the Farrer IGA. A compulsorily self-isolating Issacs matron in need of groceries calls the store to see if they do home deliveries. Not really, but what did she need? So up and down the aisles the manager shopped with the homecomer on the phone, packed the lot and took it to the doorstep. Best of all, no delivery charge.