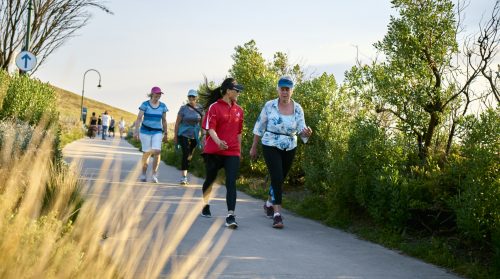 CANBERRA leads the nation in heart health, according to a new research released the Heart Foundation, but with six in 10 Canberrans still not exercising enough, there is still work to be done.

According to the not-for-profit, the ACT recorded the lowest rate of death and hospitalisation for coronary heart disease of any state of territory, putting the ACT 18 per cent lower than the national average.

Heart Foundation Group CEO Prof John Kelly says the reason for this is that compared to many other regions across Australia, more people living in Canberra have a higher level of education and income, which is generally linked to better health outcomes, as well as good access to health services.

Being active for just 30 minutes most days of the week can also help reduce the risk of heart disease by as much as 30 per cent, says Prof Kelly.

There is plenty of infrastructure to support physical exercise in Canberra, he says, including walking and cycling paths.

And yet, at 29 per cent, the rate of obesity in the ACT is only slightly lower than the national average of about 31 per cent.

“While many Canberrans may have a good knowledge of the connection between physical activity and heart health, knowledge is not always enough to motivate participation,” says Prof Kelly.

He believes that having readily accessible and free programs that can assist in enabling people to act on their positive intentions, is also key.

Which is why the Heart Foundation has launched a new initiative aimed at getting Australians regularly active, known as “Personal Walking Plans”.

For those who are not already enjoying a regular walk around Canberra, the personal walking plans are a great way to get started, with free, six-week programs tailored to different activity levels, as identified in a two-minute survey on sign-up, says Prof Kelly.

“Participants will receive their plan, along with emails and text messages to deliver information about the many benefits of walking and boost motivation across the six-week period,” he says.

The great thing about walking, Prof Kelly says, is that it can be done by anyone, anywhere, any time and by people across all age groups.

“It is free and requires no special equipment. This applies right across Australia, but Canberrans do have the advantage of infrastructure that supports exercise. There is a terrific network of walking paths and trails – from lakeside to many nature reserves, parks and forests,” he says.

Jon Stanhope - April 14, 2021
0
"As a Labor supporter for more than 50 years, I think the policies being pursued by the ACT government in health and housing are contrary to core Labor values," writes former chief minister JON STANHOPE.