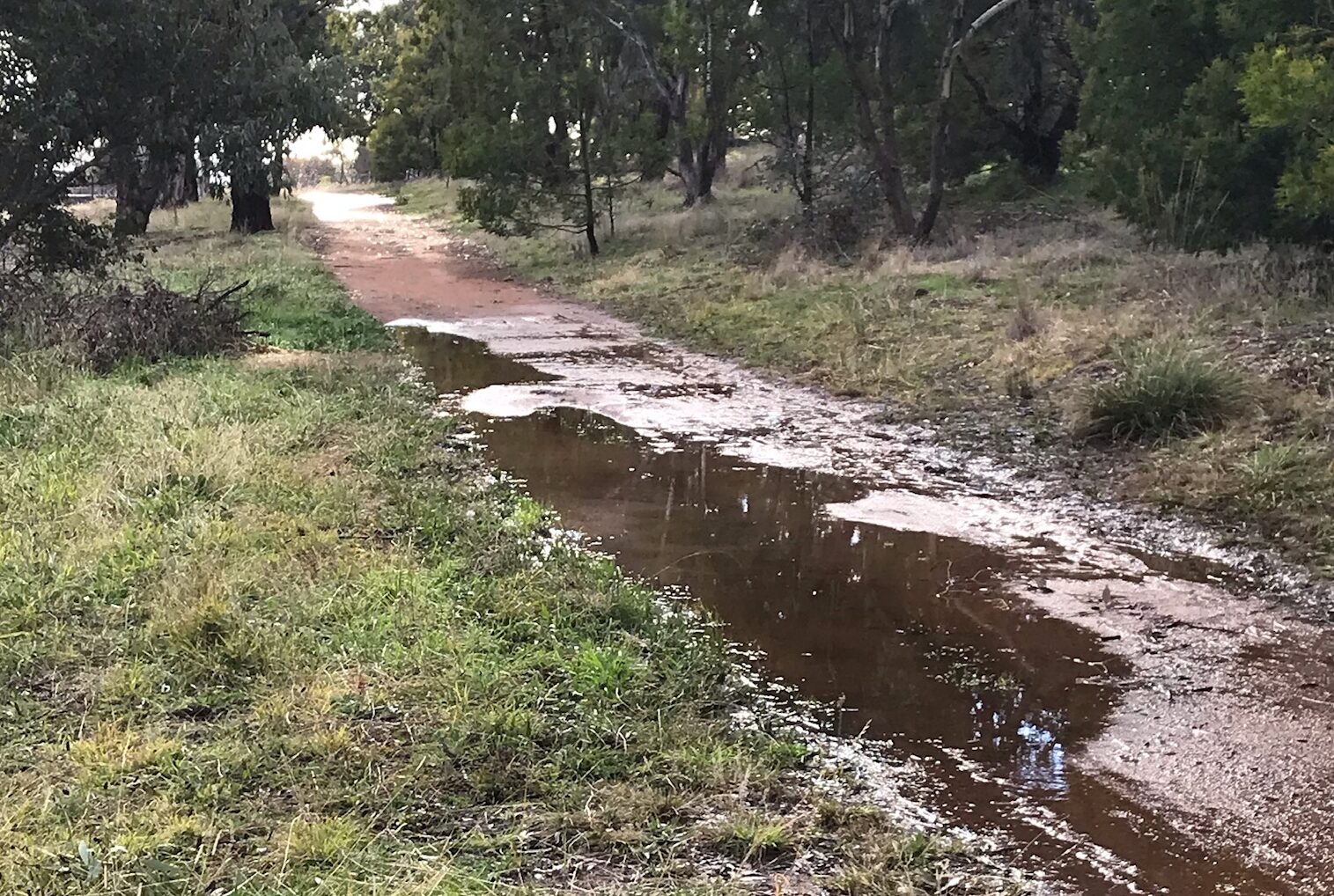 The annual winter quagmire that is the Hawker fire trail. Photo: Paul O'Connor

Letter writer PAUL O'CONNOR, of Hawker, has been trying to persuade someone/anyone in the ACT government that there's an annual issue of blocked drainage of water running down off The Pinnacle. He's got pictures to prove it.

THE walking, cycling and sightseeing fire trail immediately behind Marrakai Street, Hawker, and parts of Weetangera has become its annual impassable quagmire.

This is due to water running down off The Pinnacle and no longer being drained away by the now overgrown main ditch, half filled with soil and no longer distinguishable. Dug before 2000, the main ditch allowed water to flow away to the west by gravity down the slope behind 8 Marrakai Street and some houses in Ambalindum Street, doing no damage.

The problem is that there are two ditches, a secondary one five metres behind the houses and the main overgrown and blocked ditch, 10 metres south up the hill from the track and hard to recognise.

Representation to a local MLA, admittedly in summer when dry, resulted in a squabble about which ACT government service was actually responsible for the road and ditch.

Parks rangers, even though part of the Pinnacle Reserve, decided it was a fire-track road and so the responsibility of Roads.

I strongly suspect that Roads looked at the wrong, secondary ditch as they could not find the main, overgrown ditch, not realising there were two ditches.

Also, constructed so many years ago, I doubt any current staff are aware of the reason for and workings of the main, blocked ditch.

Damage is occurring also to house footings and drives from water seeping down the hill.

Thank you to public servants

IT is more useful than not for these columns to publish letters critical of our public servants, but we wish to single out some from Urban Treescapes and thank them.

Our son Joe was killed on January 2, 2018, on Yamba Drive and some of his mates erected a cross and planted a tree in the median strip just near the Hughes playing fields to commemorate him.

Several months ago Rachael Dawes, of Urban Treescapes, contacted us to tell us that the department needed to relocate the cross and tree as the median strip was in the middle of the proposed tram corridor to Woden.

About a month ago she again contacted us to work out the details as to where the tree and cross should go. We all agreed they should go to the Curtin side of the road and this duly occurred several weeks ago when Peter Brammall and his crew of tree-planting field officers successfully transplanted tree and cross to a great new position on the Curtin side of the road.

Our family could not be happier and we thank Rachael, Peter and staff from the bottom of our hearts for their consideration and thoughtfulness. Joe would be delighted.

Letter writer is spot on...

I WRITE in 100 per cent agreement with Peter Mitchell (Letters, CN July 8) in his letter ("Leave carbon emissions alone"), in particular the comments in his final paragraph on nuclear.

This may be controversial, but I am no "NIMBY" and would be more than happy to have one of the new hi-tech 250-350MW (aka small modular reactors, SMR) factory constructed units that can be moved to their destination on the back of a heavy mover near to where I live.

The fuel cells in these SMRs can have a fuel-replacement cycle of 2-25 years or so and are currently among the safest zero emission baseload power sources available in the world.

An appropriate Google search can be quite informative on this subject.

We must remove the nuclear moratorium clauses from the appropriate legislation and join with the rest of the world in producing cheap, clean, emission free base-load electricity asap.

Congratulations, Peter, on a great letter!

…he's got to be joking

PETER Mitchell must be trying on a massive tease in this letter (CN July 8) to get a rise from all the "greenies". No other reason for his "Leave carbon emissions alone" letter makes sense. He can only be joking.

THE PM’s vague plan for getting through covid and the ACT government’s failure to provide information about the looming loss of well over 200 car parks at the Dickson group centre (“You’ve got to wonder about the state of planning but there again...” citynews.com.au) have much in common.

They are examples of how our politicians’ love of a quick "announceable" overrides attention to necessary detail and reassurance. Marketing a notion in a fog of words or appearing to cover up an embarrassing gap in government and developer action with directions to an information-free website link, does little to engender confidence and optimism about the competent and continuous delivery of the relevant public services and support that will be needed by very large numbers of people over extended periods of time.

Reviewer got it 'wrong'

I AM an avid movie buff and I generally agree with the cinema reviews of Dougal Macdonald. However, I was astonished that Mr Macdonald gave the Aussie film "Buckley’s Chance" only one star. And more astonished that Mr MacDonald missed the first 20 minutes of the film for “weather-connected reasons” but still reviewed the film as a whole.

I loved "Buckley's Chance" and was totally engaged with it. Great cinematography, a compelling story line and great performances from the actors.

Unlike Mr Macdonald I highly recommend "Buckley's Chance" and would rate it as 3.5 stars.

And I loved the important first 20 minutes of the film that Mr Macdonald missed seeing. 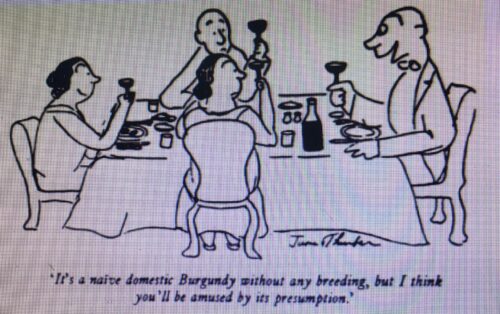 FURTHER to Clive Williams' "Whimsy" (CN July 1), the classic derision of pretentious wine snobbery was by James Thurber in "The New York Times" – "It's a naive domestic Burgundy without any breeding, but I think you'll be amused by its presumption."

I QUESTION the method by which the vouchers for the ChooseCBR scheme were given out.

It is very obvious that the system of downloading vouchers is open to rorting. People could download any number of vouchers. Given $2 million worth were supposedly downloaded in less than 24 hours between midnight and 6am, I smell a rat.

How on earth could anyone get this so horribly wrong?

NO reasonable or meaningful discussion can take place on health policies unless all parties understand the three levels of prevention in public health principles when dealing with epidemics/pandemics – be they, for example, influenza, measles, smallpox, zika virus, cholera, dengue fever, ebola, COVID-19 etcetera or drugs. The three levels of prevention are Primary, Secondary and Tertiary.

Primary prevention, by definition, seeks to prevent the initial onset of morbidity at any level and the individual's return to full health.

The remaining principles involve treatments – again with the aim of returning to full health.

Given that the so-called Spanish Flu, which started in 1918 and killed an estimated 20-40 million because of the absence of virtually all of the aforementioned primary preventions, especially vaccines, Australians are entitled to contemplate the planet-wide morbidity and mortality horror which would beset us if the same primary preventions, although less than 100 per cent effective, were not applied or enforced.

The domino effect of the virus would spread inexorably to wipe out tens of millions. So, all thinking persons can realise the situation is more than individual preservation.

Get your finger out, minister

WHAT will it take to make the federal government finally realise that granting the Murugappan family permission to stay (and return to Biloela) is a win-win situation?

The family, after a couple of years of detention, gets back to normality; the Bilo community will rejoice and welcome them back with open arms and, lastly, by showing some empathy and relenting to public sentiment, the coalition increases its chances of retaining office at the upcoming election.

The granting of a temporary, three-month visa to the parents and the eldest child, but excluding the youngest one is as cruel as it is stupid. Under Section 195A, a minister can intervene and grant a person a visa by the stroke of a pen, if it is deemed to be in the public interest to do so. As the Murugappan family has overwhelming support within the community at large, what else is Immigration Minister Alex Hawke waiting for? Come on, Minister, get your finger, as well as your pen out, and bring this costly and inhumane saga to an end.