Letter writer STEVE ELLIS, of Hackett reckons the police have enough to do without having to spend lots of time apprehending illegal scooter users…

I AM reluctant to criticise the e-scooter concept because I know that if I was much younger I’d be on one like a shot. We see many of them here in Hackett and I do have some concerns.

The admissions to emergency rooms are obviously a worry. As well, most of the riders I see are not wearing a helmet, many regularly exceed the speed limit on footpaths and sometimes carry two riders. I’ve twice seen children, well under the age limit, riding them in the company of scooter-riding parents.

Our police resources are always stretched thin and they have enough on their hands already without spending lots of time apprehending illegal scooter users. E-scooter riders must take seriously their personal responsibility to ride safely.

The blight of Canberra planning

PAUL Costigan’s column (“Canberra Matters”, CN January 21) regarding the planning morass that is bogging down the nation’s capital is 100 per cent on the money.

Why indeed is this city continuing to be blighted by the boards of three so-called planning agencies consisting of who-knows-who from who-knows-where? Do they live here or, worse still, do they have “connections” with the spate of developers who seem to be spearheading the building explosion?

With the plethora of sensible, experienced urban-planning talent existing right here, why are there so many pathetic decisions being made about the expansion of the suburban landscape and the disastrous architectural infill.

How sensible is architect Jack Kershaw’s comment about the relocation of the Canberra Racing Club into new, and presumably more spacious, surroundings at Majura thereby making use of the current location for the Lyneham urban village. Seems like a win/win situation for all concerned – punters have a new “Ascot” facility and the tram usage will presumably benefit from the urban village habitation in the long run.

Jack has also come up with several other well-thought-out alternatives to the current urban infill and tram-route aberrations, not to mention the disastrously cramped West Basin high-rise/South Bank notion.

If Chief Minister Barr had any sense, he would have made use of Jack’s talents long ago and put him on his urban-planning advisory staff.

I ALWAYS enjoy reading Paul Costigan’s articles in “CityNews” including his latest, “The stacked boards that are killing off Canberra” (CN January 21).

What he doesn’t mention is the stacked boards on some of our other authorities and tribunals, particularly the so called Independent Remuneration Tribunal.

This tribunal comprises three members, none of whom you could say are representatives of the ordinary community. All of them held high executive positions in government and never, to my knowledge, has the tribunal included executives from the Salvation Army, Vinnies, Rotary, etcetera. Its decisions not only apply to the remuneration of the Chief Minister and all our MLAs, but also judges, magistrates, executives of the ACT public service, members of other tribunals and commissions and part-time public officers to name a few.

And to say it is “independent” is rather a furphy as the tribunal’s own remuneration is determined by the Chief Minister.

It is high time that this tribunal was examined to see if it is truly “independent” and properly represents the community’s view of remuneration being paid to our political masters.

It’s not hard to be fair

I was simply amazed at the story about Hannah Mouncey as a footballer (“Transgender footballer fights off online abuse”, citynews.com.au, January 19), who just happened to be transgender. I just felt it needed a comment.

I could not believe anyone would launch into an attack on anyone like she has suffered. Social media enables this sort of thing. I do the occasional letter to the editor and I might criticise, but I think it’s at least respectful, issue focused and not personal.

I hope her chosen sporting codes are accommodating, but it’s not a good look so far. Sports like to imagine they are many things – how about being fair, decent, thoughtful and tolerant? It would be nice if others in other walks of life were the same, too.

The lights are on…

WOW, our public servants work hard: the lights are on all night every night at ABS House and at Home Affairs’ offices in Belconnen.

Government, time to increase the efficiency dividend. Don’t allow this waste to continue.

OUR fearless editor, Ian Meikle, opens his soul to reveal to “CityNews” the misused and overused words that he loathes. These include functionality (what’s wrong with practicability?), helmed (instead of lead), dove (instead of dived), unprecedented, and pivot (or “spin”, instead of change (“Seven Days”, CN December 24).

My pet hates include the now-universal preposition across (how about in, around, or throughout?), impact – what’s wrong with effect (noun), affect (verb) or result (either)?

Then there’s the growing tendency, particularly in the capital city tabloids, including “The Canberra Times”, to omit or delete the conjunction “that” after transitive verbs that are followed by a noun or a subjective clause. I have seen many examples where the missing word makes the sentence, or even the whole paragraph, nonsensical.

Perhaps I’m old fashioned, but I learnt “proper” English throughout my 19 years of school and university education, and my 40-year professional career. 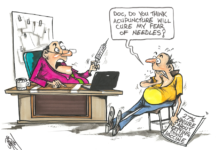