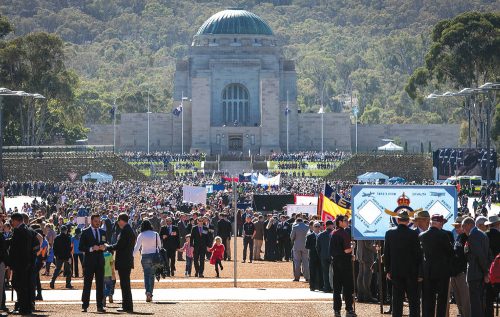 ACCUSATIONS have been levelled at parliamentary supporters favouring a $500 million upgrade to the Australian War Memorial over hiding a vote in the house.

Independent MP Andrew Wilkie felt both the federal government and opposition benches had deliberately hid a snap procedural motion in the House of Representatives on Friday (February 26) to pass through the cash splurge.

Mr Wilkie was one of two dissenting voices against the demolition of Anzac Hall, which has also “outraged” a number of architects that claim such a move violates already legislated heritage protections.

Greens MP Adam Bandt, who vehemently opposed the memorial renovation as well, was the only lower house member in Canberra that missed the procedural vote.

“To be fair, my colleague, Adam Bandt, he was racing down to the chamber to join me and with him, we would have had two voices and would have been able to call a formal division,” Mr Wilkie told ABC Canberra on Mornings on Monday.

Parliamentary motions only require two members to vote against to call for a parliamentary debate and put the issue back in the public domain.

Several Labor MPs had previously broken ranks to hold the government to account before, “when push came to shove”, they lined up and fell back to vote along party lines.

Mr Wilkie remained suspicious of the cunning timing of it all.

“My sense of things was the government and the opposition were trying to slip it through unnoticed,” Mr Wilkie said.

“Fortunately, a member of my staff was on the ball and noticed it tucked in the program in which you could easy miss it, and she said, ‘Go!’ and I literally bolted.

“Unfortunately Adam is the floor above me, he had another flight of stairs and he didn’t make it.”

The former military officer and intelligence analyst feels there is “overwhelming opposition” to spending the hefty price tag “at this point of time” of the discussion.

“I would be confident that the vast majority of Australians and I think the majority of the veterans’ community would be against spending half a billion dollars when the country has so many other pressing needs and a thumping big federal government deficit,” he said.

Mr Wilkie said the proposed spending will be for all the wrong reasons after funding has been allocated on the iconic Canberra memorial throughout the past 20 years.

Around 80 per cent of submissions to a public works committee inquiry last year from a number of veterans, citizens, leading academics, historians, former memorial directors and distinguished, and honoured Australians opposed or expressed concern about the public use of money on Anzac Hall.

“It shouldn’t be a theme park and it shouldn’t be a bottomless pit of taxpayers’ money. I can’t see how you can spend that sort of money, hence why I voted against it,” he said.

Michael Moore - April 21, 2021
0
"There are valid criticisms of government handling of infrastructure. Roads always seem to be overcrowded long before they are upgraded. The National Broadband Network has not gone well," writes political columnist MICHAEL MOORE.