SO-CALLED for its mix of natives and non-natives, as well as the seamless integration of old and new plantings, Merryl Bradley’s “blended garden” also combines veggie beds with striking foliage and ornamental shrubs carefully trimmed into curves.

“I’m not a native purist, I believe in plants co-existing alongside each other,” Merryl says.

“There are so many beautiful Australian natives and non-natives, and gorgeous variations in foliage, there’s no reason why not.”

The garden, which has an easy flow from front to back through rock-lined paths, ferns, shady white cedar and flourishing natives, will be open to the public on the weekend of April 10-11.

Merryl moved into the house 17 years ago and says she’s been gradually reducing the landscaped lawns ever since, starting with the front, though she’s kept a tiny patch in the back.

Through a thick ficus hedge are raised veggie beds, a thriving blackberry vine, experimental potatoes and a laden kalamata olive tree, thanks to the veggie garden’s location in the full sun on the south side of the house.

Equally loved by Merryl are the garden’s formal touches; English box and Double Delight roses sit alongside lobelia and Japanese maples that were original to the garden.

“I think it’s a shame to pull out everything when you take over a garden, and it’s possible to work with some of what’s already there,” she says.

“I’m a real composter, resuser and recycler, so all the garden waste gets mulched and thrown in the compost,” Merryl says.

The small garden is water-wise, too, with a total of 6000 litres of rainwater tanks.

Merryl’s mosaic art can be spotted all around the neat, structured garden, and she’ll be selling her mosaic plant pots and artworks on the open weekend.

The Blended Garden, 2 Corser Close, Fadden, April 10-11, 10am-4pm. Entry $10, children under 18 free. Bookings essential on Eventbrite. There will be no ticket sales or memberships available at the gate. Also open is Christine’s garden, 48 Weathers Street, Gowrie. Join Open Gardens Canberra for $25 and all gardens are free for a year. 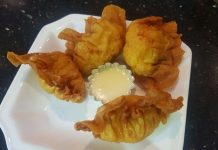 Helen Musa - April 20, 2021
0
General manager of the National Folk Festival since 2019, Helen Roben, is moving on, having been appointed CEO of Music for Canberra.

Lucy and Bones to make ‘golden’ music together