IT started in Throsby when, during an early morning burglary, CCTV showed a man in mobile phone contact with someone while robbing the premises. 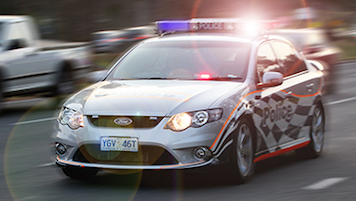 This was happening around 1.50am yesterday (April 30) when the offender suddenly fled the scene, dropping his phone as he left.

At about 2am police then received a report of multiple offenders attempting to get into another house in Throsby.

Once inside, a resident was allegedly threatened with a knife and the men demanded money before taking items, including a red Honda CR-V.

Then at 4am residents at a home in Casey disturbed two men allegedly attempting to steal two vehicles including a Suzuki Vitara. On being disturbed, both men fled in the Suzuki.

A short time later, police were travelling eastbound on Clarrie Hermes Drive in Nicholls when they spotted the two stolen vehicles and, despite using stop sticks, both cars failed to stop.

The Suzuki stopped in Charnwood a short time later and a 32-year-old man was arrested at the scene. He was found to be in possession of property allegedly stolen during the Casey burglary.

A second man jumped from the Suzuki to the Honda CR-V and fled. Police chased it to Belconnen where it was stopped and a 23-year-old man was apprehended. He was found in possession of property allegedly stolen from the second Throsby burglary.

Police are looking for a third man who ran from the Honda.

Police say both cars have been seized for forensic examination and that a large amount of stolen property has also been recovered.

Police say their investigation continues and further charges are expected to be laid at a later date.