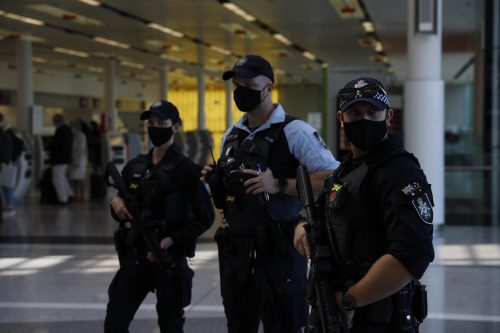 DISRUPTIONS to air travel due to covid grounded organised crime networks nationwide, but with planes increasingly back in the air, the AFP today (April 13) relaunched its “Airport Watch” public awareness program at Canberra airport.

First launched in 2012, the program is aimed at educating and enabling members of the public to report suspicious activity to officers.

This can be done by calling the AFP’s Airport Watch hotline, according to Canberra Airport police commander Simon Henry who says that officers will also be focusing on educating staff at airport businesses who may be working in an airport for the first time

“Due to COVID-19 significantly disrupting both the aviation industry and organised crime supply chains, it is important to prevent any attempts by criminals to exploit the disruption to their own criminal ends,” says Mr Henry.

“Aviation industry staff and the public can make meaningful contributions to the prevention of such exploitation.”

Mr Henry is asking the public look out for people acting strangely, taking photos or recording in security areas, showing an unusual interested in security procedures, asking questions about the airport procedure or trying to gain access to secured areas.

The program will target the transportation of illicit drugs and weapons, but will also bring more attention to human trafficking or the coerced movement of people through the Australian airports, says Mr Henry.

“Airport staff have an important role to play in protecting people who are vulnerable to these exploitative crime types, particularly as international travel increases again.”

Suspicious activity, including suspected human trafficking, can be reported to the AFP Airport watch hotline on 131 237.

Ian Meikle - May 16, 2021
0
You don't mess with the good burghers of Griffith if the negative response to a rezoning application is any guide. It's "Seven Days" with IAN MEIKLE.