Theatre / “Wolf Lullaby”, by Hilary Bell, directed by Jordan Best. At The Q, Queanbeyan, until February 27. Reviewed by JOE WOODWARD.

“WOLF Lullaby” is described as being about the “sources of violence” and even about the very existence of evil.

However, Jordan Best’s production delved very deeply into the disturbing yet real horrors people face when relationships are strong yet conflicted by unpalatable evidence of wrongdoing.

Drawing out nuanced performances from the cast, the Echo Theatre production posed questions for the audience within a “what-if” scenario. The smugness of happy families and the idealistic gravitation towards an ideal of the ordinary is shattered by a smiling and seemingly happy nine-year-old child.

Rachel Pengilly provided a strong performance ranging from very stylised gestures and vocal delivery to moments of intense realism. The fact that she played such an exasperating nine-year-old character with conviction enabled all the other characters who circled around her to respond with huge emotional outbursts that seemed quite natural and expected.

The tragedy form is not generally popular in theatre these days. Fatal flaws in high status characters have given way more to circumstances and situations that define one’s actions. “Wolf Lullaby” reverses the usual structure of tragedy making the lowest status character, with the most to lose, the central figure.

She fights hard to evade her fate; in doing so, takes down the people around her, particularly her mother played by Natasha Vickery. As with classical tragedy, the characters must struggle to defy or evade their ultimate fate.

Staged with an efficient set with subtle use of special effects, “Wolf Lullaby” has enough psychological power to remain imprinted on the psyche of its audience. Performances, pacing within scenes and use of stage space all contributed to the creation of vicarious fear and a levelling sense that life is not always knowable. Pengilly, Vickery, along with Craig Alexander and Joel Horwood performed with conviction and moments of highly-charged intensity.

Sometimes, the rhythm of the production was stalled due to annoying black-outs and some false endings. However, this aside, “Wolf Lullaby” has much to offer and should be priority viewing for anyone interested in experiencing the power of theatre to evoke apparently invisible realities within social and psychological existence. 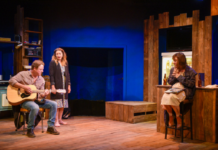