BANGARRA started with a bang – literally.

Their first new work in three years began with a startling aural assault accompanied by a visual display, on a screen the width of the entire stage. Discordant music and screeching, static flashes, archival footage and the depiction of a black and white brokenness gave a short snapshot of what was to come for both the indigenous people of The Kimberley, with Colonisation, and for the audience to observe. And so began the journey of “SandSong: Stories From The Great Sandy Desert”.

The stories of “SandSong'' were set against a stunning and effective set design by Jacob Nash. A shimmering backdrop, with a glorious lighting design by Nick Schlieper, turned from burnt orange, with glistening lines of erosion on a wet-looking earth, the sun-scorched ground and red sand, into the trunks of skinny trees in the evening light and night sky. It was spectacularly beautiful.

Artistic director Stephen Page and Frances Rings brought a noticeably different style of choreography to this show, for and with the ensemble, many of whom are new to Bangarra. Because the dancers perform with differing styles and nuances, finding the balance with timing and synchronicity is a challenge, regularly pulling focus between the dancers. 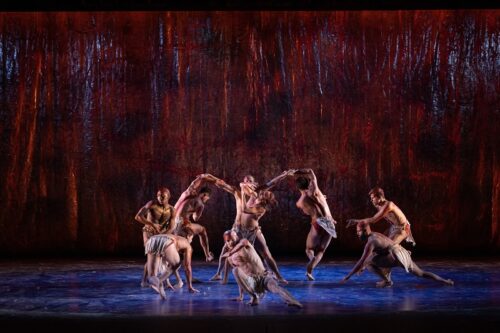 Jennifer Irwin, the long-standing costume designer for Bangarra, includes a lot of elements in the costuming beginning with the dancers in layered, multi-textured costumes, to the striking headdresses worn by the men and the baskets worn around the waists of the women as they dance.

The performance unfolded in distinct sections, beginning with the connection to the desert homelands of the Wangkatjunka and Walmajarri people and their male and female rituals, refreshingly embracing and enlivening masculine and feminine energies. Guttural tones, cocky gestures and grounding movements of the men contrasted with the lighter, flowing movements of the women. The women’s dance, “Skin”, in particular, had beautiful choreography with attractive circular movements, hand gestures and positioning.

One dance told the true story of the reclaiming of a stolen totem. Men wearing elaborate headwear and leaves took turns to present themselves and “steal” back the totem. To the side of the stage, the women sat weaving their baskets, seemingly uninspired by the men parading like peacocks. The evening smoking ceremony, “Spinifex”, with its moonlit sky, mingling of men and women, wafting smoke and beautiful soundscape was the pinnacle of beauty across all design and dance elements, and a highlight of “SandSong”.

Enter the white man. The next section was frantic and moved into contemporary dance, as indigenous men and women were auctioned off to work on white farms and properties. The choreography appealingly morphed from traditional dance moves into contemporary reworkings of them. “Station Labour”, with the men in black pants and tops, worked to effectively associate the farm work with incarceration, both in costume and movement. 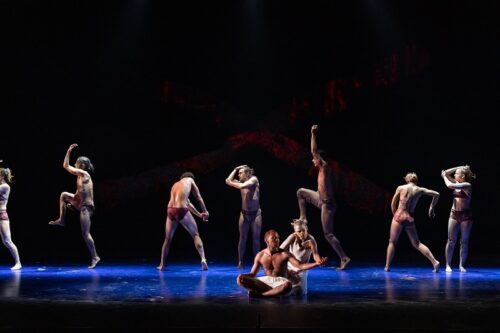 A short aerial dance, apparently representing a metaphorical cyclone of events and action, was an unexpected and unnecessary inclusion. Its cyclonic intention, whether metaphorical or literal, didn’t come across and instead seemed an extraneous addition, included for something a bit different.

A large, chunky prop was the perfect representation of rock, earth, a shelter, bark, and even a lump of coal, depending on how it was lit and manoeuvred. A young man emerged from under it, struggling with drug addiction. His costume and the set perfectly and immediately portrayed him stuck between two worlds. As he is soothed by a female entity, and called back to country and healing, the final segment begins.

Painting ceremonies used to heal and reconnect had the dancers return to and reintegrate with the land on their own terms, only this time, costumed in bright red and black skirts (the length of which seemed to bother the dancers), black bondage-looking tops and Egyptian-coloured wraps for the men. A loss of innocence and a new history is now part of their story. Sinking back into the earth, “we belong to this country” are the final words spoken.

Bangarra has created another beautiful, texturally rich production, covering many topics. An exhalation, a sigh, a stomp, smoke and native language whispered over beautiful soundscapes create a meditative atmosphere before being reminded of distressing subject matters.

“SandSong” is a sumptuous feast for the senses and also food for thought.