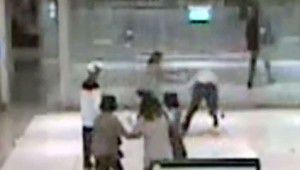 ACT Policing is investigating an aggravated robbery that occurred at the Royal Hands Chinese Massage store in the Canberra Centre on Sunday 7 June.

At about 5.15pm a man entered the shop and accessed the cash drawer at the front of the store while a second man stood watch outside.

A staff member attempted to stop the man from taking the cash and a struggle ensued spilling into the main walkway of the Canberra Centre in view of several members of the public. Police would like to speak to those witnesses.

During the struggle, the staff member sustained cuts to her right forearm from a sharp edged weapon and the offenders left the store with a sum of cash.

The male offender is described as being of Caucasian appearance, between 30-40 years of age, solid build and around 180cm (5’11”) tall. He was wearing a white coloured baseball cap, grey hoodie, grey jacket with a white collar, blue denim jeans and white sneakers.

The second man, who was waiting outside the store at the time of the aggravated robbery, is described as being of Caucasian appearance, skinny build, around 186-190cm (6’1” – 6’3”) tall with short black/dark brown coloured hair and a beard. He was wearing a dark coloured jacket with a white collar and had blue denim jeans.

Police are urging those people who witnessed the incident or anyone who may have any information that could assist police to contact Crime Stoppers on 1800 333 000, or via act.crimestoppers.com.au. Information can be provided anonymously. Police remind people they should not report crime information via Facebook and Twitter pages.