SMALL symbols and tattoos cover the body of this masculine entity, already in the process of his endeavour, in a black, empty performance space, as the courtyard theatre filled. Are these markings self-inflicted? Have they been done to him in ritualised ceremonies, were they forced on him?

“Hyperspace” is the third in a series of works from James Batchelor and his collaborators, after the opportunity to be part of a scientific expedition to study sub-Antarctic islands in 2016.

While this work focuses on the body, the masculine, the body in Space, as well as this particular space, Batchelor’s choreography also conjures up a body in water. With both dance, visual arts and soundscapes, there is often a symbiotic beauty in the depictions of deep sea and Space, blurring the lines of which is being portrayed and creating another layer of immersion and interpretation. Batchelor appears to do this here, particularly in the early part of the work where his arms move as though he is caught in a strong current and being swirled around.

Batchelor relishes exaggerated slow motion and detailed, slow movements, performed so precisely and with such focused intent in the transitions of movement, that certainly, even his eyeline and focus has been pinpointed to an exact spot.

Batchelor performed with perfect balance and control, to a soundscape that incorporated nuanced noises of trains hurtling along, their screeching brakes, of jet planes taking off along and galactic beeps and pings. Yet for the most part, it was quite soothing. Musical cues cleverly yet subtly intensified and diminished the tension.

The careful and hyperslow choreography saw Batchelor barely move away from his starting point, with only a spotlight, changing from white to red during the performance. The slightest manoeuvre and a violent gesture became an innocent one, calm turned to threat and vice versa.

Batchelor cleverly managed to embody both a controller and the controlled, gently and undetectably switching between them, as he explores and observes his body and the things that happen to it, in the place where he is. Without judgment, he explores and accepts the contours of his body and in doing so, invites the audience to do the same – observing masculine, sculpted arms, his adam’s apple, the slight sweat beginning to form, his nuanced manipulations. Batchelor performed topless but that didn’t give scope to exploring and utilising more of his lower half which would have felt natural. The wearing of shoes, although covered black velvet, was puzzling.

This work invites the viewer to slow down and to be in the time and space with the performer, perhaps difficult at first, but becoming hypnotic – buying in to the still, the miniscule and the magnitude of a body in Space and the space in a body, of movement and stillness. Mirror neurons seemed to begin firing and the feeling of moving a corresponding body part was an interesting observation.

No one applauded until Batchelor took his bow as the mood had been set and no one was willing to break it.

This performance was preceded by a hybrid jazz set from musical artist Pheno. 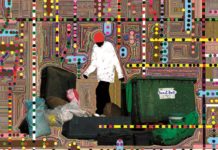 Andrew Mathieson - March 1, 2021
1
The brewing animosity that has bubbled for more than 25 years strangely spilled over into sympathetic words from Dan McKellar's own lips.