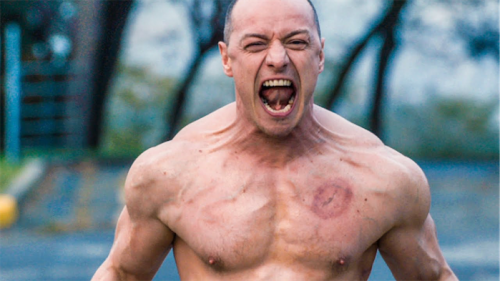 ALMOST two years ago to the day, I reviewed “Split”, the second film in director M Night Shyamalan’s filmic dissertation about the condition that psychologists call Dissociative Identity Disorder but we mere mortals would call Multiple Personality Disorder.

Since a spectacular railway crash marking that film’s end, the 24 people inhabiting the mind of a young man played by James McAvoy have been in care at Allentown State Hospital in Pennsylvania.

For convenience, I’ll call him Crumb, one of the 24. An early sequence in “Glass” projects intense sexual tension as it shows him walking around tormenting a group of high school girls manacled to railings.

David (Bruce Willis) is a good guy who’s terrified of water. He’s leaving for work in a local security supplies store. It’s raining and he’s wearing an enveloping oilskin overcoat. And he is about to tell the cops that he thinks he knows where the girls are.

At the hospital, Elijah (Samuel L Jackson) sits in a wheelchair. Elijah spends more than half the film not speaking. He’s got nothing to say. As a child, he was involved in a fairground ride accident that played merry hell with his bones which are too prone to breaking for him to move around normally.

On today’s visit, psychiatrist Dr Staples (Sarah Paulson) is introducing David and Crumb to technology set to trigger what they most fear if their behaviour calls for a calming response. Aversion therapy in spades, indeed. Elijah doesn’t need it. He’s not doing anything. Oh, yeah?

These are the principal characters in a film taking just on two hours to see the three males dead in the hospital grounds. Their performances are all commendable, especially McAvoy’s, combining athleticism with dramatic power.

The narrative builds a sense of cinema fantasy that Night Shyamalan’s screenplay links to real-world activities that young people find exciting. He makes reference to a comic-book convention and scorns how such material manipulates young minds. The convention, he declares, is a disguised marketing tool. And he’s not wrong.

Without doubt, Night Shyamalan knows how to crank up audience expectations. Is Crumb a monster beyond redemption? Or is he a pitiable victim of inner turmoils not of his choosing and beyond his control. We’ll never know. “Glass” leaves us with a sort of assurance that the series ends here. But heck, this is Hollywood.