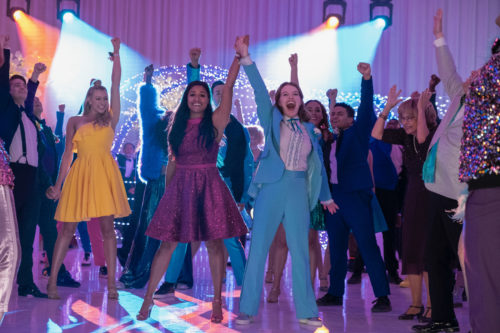 I DIDN’T know what I was in for when I decided to review “The Prom”.

Here’s the scant information the distributors had provided about it: “A troupe of hilariously self-obsessed theatre stars swarm into a small conservative Indiana town in support of a high-school girl who wants to take her girlfriend to the prom.”

Reading that the cast included Meryl Streep and Nicole Kidman kinda influenced my choice (another reason was that most of the new releases for the week were of old movies).

At age 70, playing Dee Dee, whose Broadway musical about Eleanor Roosevelt got crucified by the critics on opening night, Meryl Streep, cinema royalty, sings and dances with the best.

This quartet of big-city theatrical folk needs a cause celebre to re-energise their careers. Twitter reports how the PTA at a high school in Indiana has just voted to cancel its annual prom rather than allow Emma (Hollywood newcomer Pellman) to bring another girl as a date.

Big city values collide with mid-west as the Broadway folk set forth to bring sophistication. The plot visits a number of minor theatrical issues on the way to focusing on the lesbian relationship that Emma wants to bring out with her girlfriend Alyssa (DeBose), who happens to be the daughter of PTA leader, bigot, caring parent and homophobe Mrs Greene (Washington).

Lesbianism is currently a popular theme in American movies. “The Prom” offers little explanation of or for their feelings. How two women love each other is their business. As it should be.