The Canberra Liberals were up in arms this morning as Treasury officials and the Chief Minister Jon Stanhope were called back to Estimates for the final committee hearing over the shocking news that unemployment has gone down in the capital.

At 6am a press release from the Liberal Party landed, quoting shadow treasurer Brendan Smyth:

After extensive questioning from the Opposition in the Estimates hearings it has been revealed that the employment forecasts were understated, to the point were the ACT would have to see a decline in employment in the last months of this financial year for the forecasts to be accurate.

Opposition leader Zed Seselja demanded to know how much employement figures would have to drop by for the Budget forecast to meet reality.

“This is point scoring rather than information gathering,” said Chief Minister Jon Stanhope.

During the hearing it was revealed that the employment forecasts used were from February, released in mid-March. Under Treasurer Megan Smithies said this was because the next lot of forecasts were too late to be included as the 2010-11 Budget was devised.

The Budget was based on the February figures. The ABS update actuals for April show greater than expected employment growth.

What was important with the figures was the trend was still going how we thought it should. The direction was in line with what we were expecting.

Investment and Economics Division executive director Roger Broughton said they didn’t have a figure for the gap between the current employment forecast and that projected in the Budget.

“At no point when we were planning the Budget did we expect employment to drop,” he explained.

“Our forecasts are based on growth rates, not levels.”

Smithies said: “This is not rocket science.”

Smyth said: “If it wasn’t rocket science, why hasn’t it [the gap] been reflected in the Budget?”

The key point here is that the ACT Budget was based on a certain level of expected employment growth. That level has turned out to be better than forecast, which means it doesn’t match the Budget.

The Liberal MLAs seemed to be arguing that Treasury should have used later forecasts because that would have been more accurate, but Treasury said they had to use the figures available when they started preparing the Budget.

“The line has to be drawn somewhere,” the Chief Minister said.

“It’s entirely academic, you can thrash around all you like for a justification for your press release,” he told Smyth.

“I’m more than happy with the rigour of the process.” 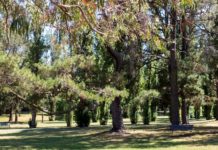 CityNews - June 5, 2020
1
Renewable energy investment in the ACT has driven down retail electricity prices, according to the ACT Independent Competition and Regulatory Commission.