STUDENTS of ANU’s Burton and Garran Hall have invited ANU Vice-Chancellor Professor Ian Young to their latest musical in the hope it will convince him “not to give up” on the university’s School of Music. 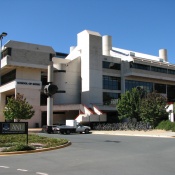 The 75 students will perform the musical “Anything Goes” next week, saying they are making an effort to “get on with the show” and “put on a brave face” despite 13 recent job cuts to the school by Professor Young.

Musical director Toby Moffatt says he believes the show is a way for all areas of the university to support the School of Music.

School of Music student Tate Sheridan says he has been “shaken up” about the cuts.

“We all found our own ways to cope with it, mostly through protesting and trying to fight the cause,” he said.

“A lot of it hasn’t worked sadly, the changes are still going ahead, but it’s outlets like this musical which are great; we’re keeping things going, we’re still embracing our talents, we’re getting things out there and sharing the love.”

“Anything Goes” will run from August 8- 11. Tickets are on sale through the Burton and Garran Hall office.