A DRIVER had a lucky escape early this morning after his car rolled down an embankment while he was trapped inside. 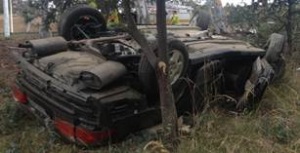 Around 5.15am, police attended the collision on Parkes Way after the car rolled-over near the off-ramp to Clunies Ross Street, Acton.

When they arrived at the scene police found the black Honda Accord down an embankment with the man trapped inside the car.

The driver was eventually freed from the car by firefighters and taken to hospital.

His 26 year old passenger was out of the vehicle when it collided and was also taken to hospital for minor facial injuries.

Acting Superintendent Rod Anderson from Traffic Operations says it was only millimeters which stopped this collision becoming potentially fatal.

“The driver was restrained by his seatbelt when we arrived at the collision and we believe this quite possibly saved his life,” he says.

Police are investigating the collision.

Anyone who witnessed the incident or who may have seen the car prior to the collision should contact Crime Stoppers on 1800 333 000, or via www.act.crimestoppers.com.au. Information can be provided anonymously.