A 19-year-old man will be charged with high-range drink-driving and negligent driving after his vehicle left the road on a bend, struck a parked car and careered into a house at Louisa Lawson Crescent, in Gilmore early this morning causing damage estimated at more than $100,000.

When the driver lost control of his Ford Falcon utility at around 3.40am, it crossed the nature strip, hit a Toyota sedan parked in a driveway, then crashed into the brick bedroom wall of a house, say police.

The sole occupant of the house at the time, a 29-year-old woman, was unharmed even though the car came to rest centimetres from where she had been sleeping. There was structural damage to the brickwork of the house, and broken windows.

The driver, who is a provisional licence-holder and required to have a zero limit of alcohol, was found to have a blood alcohol reading of 0.171.

Sgt Krissy Barrett, in charge of the Tuggeranong patrol team that attended the incident, said: “This incident could very easily have had a tragic outcome. 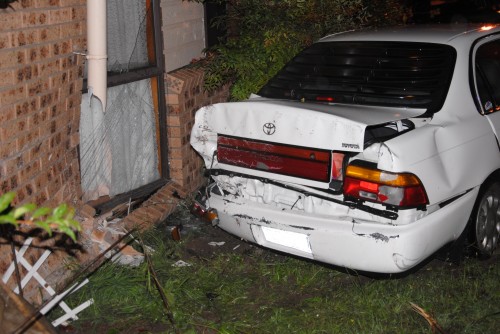 The effects of alcohol on the driver combined with the hazardous road conditions we saw while on patrol throughout the night were a recipe for an awful outcome. In this case, both people involved were fortunate to escape without injury.”