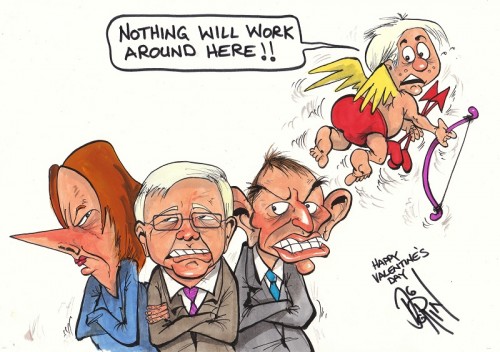 SOME wag at the washed-out PM’s XI cricket match commented that it would have gone ahead had Tony Abbott been Prime Minister, “he has a much closer link to upstairs”.

He then pointed to the heavens in a knowing way with the implication this was just another failing of the current, non-believing Prime Minister. It had me reflecting on the ACT and Federal parliaments.

Federally, Tony Abbott wears his Catholicism on his sleeve as does ACT Opposition Leader, Zed Seselja. In the ACT, all the Liberal MLAs other than Jeremy Hanson are Catholics. Former Prime Minister, Kevin Rudd, also made it clear to the populace that religion played an important part in his thinking and his politics.

There was a time when people associated religion with caring. And in many situations it is still the case, with many religious groups providing a range of caring services.

However, the opposite seems to have emerged in politics. Religion in modern politics seems to be more heavily associated with the right than the left. And the right is strongly of the camp that believes in personal responsibility and personal advancement.

It is the left, like the non-religious ACT Chief Minister Katy Gallagher, that argues for structural change to improve the plight of the most disadvantaged.

The rain that washed out the PM’s XI cricket match proved an excellent metaphor for the media. Phrases such as the “growing storm clouds”, “washed out Prime Minister”, “batting away speculation”, “likely to be bowled over” were all used to tease out their own speculation that the Prime Minister will be challenged by the Foreign Minister, Kevin Rudd.

Examining politics through a religious lens allows an easy contrast between Gillard and Abbott – the religious and the non-religious. However, competition between Kevin Rudd and Tony Abbott through the same lens is about who could be seen to be the more religious!

As we close in on a time for a genuine choice between leaders, between philosophies and between parties, it is time to reflect on what Abbott really stands for rather than what he stands against.

An October election in the ACT is also time to reflect on the influence of the Catholic religion within the Seselja Canberra Liberals and to consider how it contrasts with what is being offered by the local Greens, the Labor Party and any other candidates that emerge.

Sponsored Content - November 26, 2020
0
It can be an uncomfortable reality, but organising funeral arrangements, creating a will, or investing in an estate plan is an important part of life. This is a sponsored post.