DRIVERS are growing increasingly frustrated by the number of simultaneous roadworks across the ACT, say the Canberra Liberals. 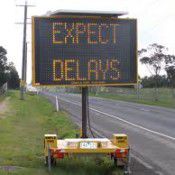 He listed roadworks on Barry Drive and Parkes Way, carpark resurfacing, construction of a roundabout for the new Emergency Services building, and redevelopment of Woolworths impacting pedestrian entrances and the rear car park in Charnwood, and works on Cotter Road, Streeton Drive, Molonglo and Heysen Street as examples of simultaneous roadworks “that have heavily impacted large portions of the city.”

“Whilst considered and effective investment in road infrastructure is needed, the ACT Government has a bad track-record of timing roadworks,” Coe said today.

“Given there is a single authority managing roadworks in the ACT and that we do not have separate councils, it’s unacceptable that road works are not coordinated. It’s all very well for the Government to put out press releases and signs advising people to take alternative routes, but often this is not possible for motorists.

“Rather than treating road maintenance and upgrades as ad hoc political decisions, there should be a genuine strategy for the ongoing upgrades of infrastructure.”

“The upgrades that are underway are designed to alleviate traffic pressures and accommodate growing populations in Canberra,” he said.

“Unfortunately, delaying these upgrades would typically cause more inconvenience later on and Roads ACT endeavours to complete them as efficiently as possible.  I hope Canberrans can put up with delays now in exchange for significant improvements in the future.

“It’s easy for the Liberals to criticise from the sidelines, but the irony is that Mr Coe is Canberra’s worst amateur engineer and the Liberals are the masters of ad hoc road proposals. They frequently call for random, expensive, political-driven road expansions without any costing or strategic planning that would ensure upgrades are prioritised for the needs of our city.”