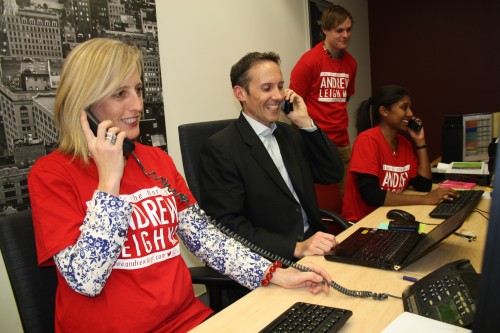 T-SHIRTED and relaxed, Chief Minister Katy Gallagher looks at home in Dr Andrew Leigh’s electoral Tardis as it comfortably defies the time and space of electoral reality across our borders.

The chief joined the grinning member for Fraser to gee-up householders with after-hours calls in support of a Federal parliamentarian with the 11th safest Labor seat in the country and a fat pillow of 14.2 per cent before he needs to dust off his CV. The equally hardly-marginal southern belle Gai Brodtmann holds the Labor seat of Canberra with a buffer of 9.1 per cent, the 33rd safest seat (or the 40th most vulnerable). 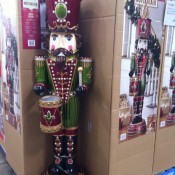 The ubiquitous American retailer has risen beyond its cultural obsession for grisly Halloween accoutrements, to deck a Majura Park aisle with that most oblique of Christmas decorations, the life-size Nutcracker (a snip at $369.99).

And also for those counting sleeps in August, there is an embryonic selection of Christmas decorations. Now Costco’s blinked, the rest of them won’t be too far behind, with two fully lit Christmas trees spotted already at DJs in Woden.

LAUNCHING its Senate campaign with a call to action of “more bang for your buck”, the Sex Party has added two new policies to its traditional libertarian platform; it wants now to bring back fireworks and supermarket plastic bags.

ACT Senate candidate, Deborah Avery, 44, a self-styled Kambah “bogan” and small business operator, says she wants the return of the traditional family bonfire and is also calling for the ban on plastic bags to be overturned. All very laudable, but last time CC looked, shopping bags and fireworks were Assembly issues and unlikely to grab the imagination of the Federal Parliament.

BRADDON restaurant Eightysix, which hit the dining scene with a bang just a short while ago, has now hit the front cover of the latest edition of the national foody bible, “Gourmet Traveller”. What caught the editor’s eye? Popcorn! That’s right, it’s the restaurant’s to-die-for caramel popcorn sundae. Eightysix is one of 12 ACT restaurants that made it into the 2014 Australian Restaurant Guide.

SHOULD we be surprised that an online “experience” retailer that proclaims itself as having started a happiness revolution can come up with this pre-election nonsense?

RedBalloon has discovered that Tony Abbott is more likely to receive a Father’s Day gift than his opponent Kevin Rudd. This tosh is supported by a survey, too stupid to comprehend, of 1059 dopes who allowed themselves to confirm the politically divisive news that 53 per cent of Liberal voters will purchase a gift for their dad, compared to only 49 per cent of Labor voters.

“It’s a slim advantage, but if your kids vote Liberal, you’re ahead in at least one poll this year,” the press release breathlessly pants. Enough, already.

HERE’S 15 minutes of fame that would send a shiver down the most extroverted of men. The inaugural World Vasectomy Day is looking for volunteers to have their snip live-streamed online to a global audience, in the world’s first vasectomy-athon.

The goal is to have 1000 free vasectomies performed across 25 countries in 24 hours in the largest male-oriented, global family planning event on October 18.

The “flagship” moment will be the live vasectomies performed in front of invited experts and a studio audience, webcast from Adelaide.

Registrations, before September 12, to worldvasectomyday.org

READER rings Canberra Times Direct to suspend his home delivery to find his call being taken in faraway Manila in the Philippines (where they also take the classifieds). “They’ve virtually outsourced all their editorial material, so I suppose it is not surprising,” he sniffed to CC. 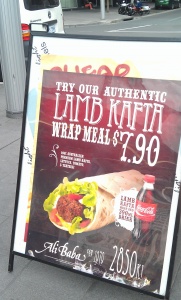 CC, looking for a slightly late lunch at 1.30pm on Friday, was inspired by the promise of a large sign outside Ali Baba in Civic touting its “authentic lamb kafta wrap meal”. As the young woman behind the counter started to prepare the meal, her boss stopped her. “Lamb kafta?” he asked. “No. Finished.” Needless to say, your hero harrumped off, hungry. Memo Office of Fair Trading…

SIAN Day has just started a company specialising in body corporate management. No big deal, but there’s a difference with Strata Difference in that 10 per cent of its profits are intended for local Canberra organisations and charities. Menslink, which provides mentoring services to local young men, is the initial beneficiary.

The unsurprisingly grateful Menslink CEO Martin Fisk says: “Their innovative approach to charitable profit sharing is to be commended – both to their clients and to the broader business community.”