THE ACT Government has accepted $25 million from the Commonwealth to help fund pay rises for ACT workers in the social and community services (SACS) sector. 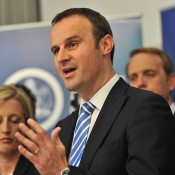 The ACT Minister for Community Services, Andrew Barr has welcomed the offer, pointing out that the workers who have been underpaid are from “organisations that deliver vital services to the most disadvantaged Canberrans”.

“Under the agreement, the ACT Government will provide $32 million over nine years to support our 4000 community sector workers, bringing the total funding of our two governments to $57 million,” Mr Barr says.

The ACT is the second state or territory to reach a joint funding agreement with the Commonwealth to help the social and community services sector pay its workers more.

“Since December 2012, we have already paid about half a million dollars to 37 organisations and made a significant difference to our community sector workers, a high percentage of whom are women,” Mt Barr says.

“We know the sector is predominantly made up of female workers who have been under-remunerated for too long and we do not accept that gender should play any part in decisions about salary – that’s one of the key reasons we were strong in our early support for the equal remuneration case.”

In February 2012, a group of unions representing SACS workers won the first ever successful “pay equity claim” before Fair Work Australia, with the support of the federal government.

In delivering its first Equal Remuneration Order, Fair Work Australia ruled that the SACS workers were being underpaid, along with their peers working in crisis accommodation services, with a major reason being discrimination on the basis of gender.

The Gillard government supported the case and pledged to help fund the pay rises, which will increase salaries of the workers by between 23 and 45 per cent in stages over the next nine years in order to spread out the cost to employers. The first small pay increase took effect in December last year.

The Federal Minister for Community Services, Julie Collins, is “pleased” the ACT Government has accepted the Commonwealth’s offer and says the case is a “significant advance” towards equal pay for women across all industries.

“It’s a long overdue victory for the community sector with as many as 120,000 of the 150,000 SACS workers across the nation being female,” Ms Collins says.

Ms Collins said the Gillard Government has set aside “close to $3 billion” to meet its obligations to fund higher pay in the SACS sector.

“Our share of SACS funding for programs under Commonwealth-State Agreements has risen from $1.1 billion to more than $1.4 billion with the remaining $1.6 billion allocated to community sector providers,” she says.

“Negotiations with other state and territory governments are continuing and I encourage them to follow the lead of the ACT and South Australia.”