KEVIN Rudd’s return to the Lodge was a minor miracle. There is a bigger one to come: that’s the one where he returns the Labor Party to government at the forthcoming election.

“So far, so good,” he’s thinking. But between now and polling day (the only one that counts) quite a few chips must fall his way before he can pull off the big one.

The first and most important is that he must avoid political stumbles himself, some ghastly incident with a staffer or an attendant that reminds voters of the old Rudd and his legendary impatience with underlings. This is entirely in his hands and the key is his getting a decent night’s sleep – not just once a week when he’s exhausted, but every night. This calls for personal discipline and tough talking from wife Therese and daughter Jessica when Ms Rein is away on business.

All those excesses of yesteryear occurred when he pushed himself over the limit, claiming that he only needed four hours a night. It was nonsense then and it’s even more nonsensical now he’s three years older.

Second, he needs his ministerial colleagues to show a similar sense of discipline and responsibility by doing what he could never do – forgive and forget… or at least keep their traps shut until they write their memoirs in their sere and yellow.

I’m thinking particularly of Peter Garrett with whom he has had a curious relationship since they were at the ANU’s Burgmann College together in the 1970s. Peter Garrett was a year ahead of Kevin and Therese, who met each other there on the first day of Orientation Week 1976.

Garrett became famous as the singing activist of Midnight Oil well before Rudd and there was undoubtedly a sense of rivalry between them. Rudd then surpassed him and took some pleasure in promoting him to Cabinet. But Garrett then took the fall for the “pink batts” affair, which must have riled him more than somewhat. But his recent demeanour suggests he’s prepared to let bygones be bygones for the sake of the Party.

Julia Gillard, too, must be prepared to drift into the background and keep her peace until the election is over. She is a class act and will not rock the boat, if only because she knows Tony Abbott in Government would demolish her signature reforms in education and climate change.

Third, he must not get so far ahead in the polls (the ones that don’t count) that the Liberals decide to replace Abbott with the much more politically palatable Malcolm Turnbull. Don’t be fooled into thinking the conservatives wouldn’t stoop to such Laboreseque manoeuvrings in quest of power. If they thought they could win with Malcolm, even if it meant retaining the tax on carbon and abandoning the “stop the boats” mantra, they would do it in a heartbeat.

Of course, Rudd will not let up for an instant. It wouldn’t matter if he and Labor were 10 points ahead of the Opposition, he’d still chase every last vote. He doesn’t want a narrow win (much less a hung Parliament); he wants the miraculous victory of the kind Paul Keating still cherishes: “The sweetest one of all”. 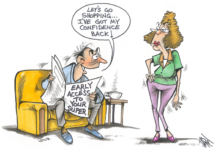