BILK Gallery?s kicks off tomorrow for 2013 with “Bloom and Blush,” a vibrant collection of wearable “blooms” by Adelaide jewellers Kath Inglis and Peta Kruger, whose work is described as “colourful in a new and surprisingly playful way.” 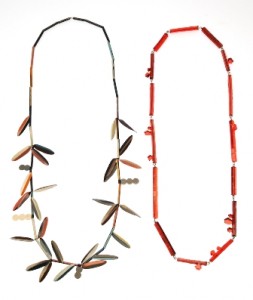 Kruger works with patterns that are quirky, unexpected and delicate. She hand paints brass and gives it a clear powder coated coating for protection.  The pieces are cut out, twisted and assembled.

An alumnus of Adelaide’s Jam Factory Associate Program in the Metal Design Studio, she  has shown in numerous exhibitions nationally and internationally. In 2011 she was the recipient of an  Australia Council’s Jump Mentorship grant and funding from the Ian Potter Foundation to undertake a mentorship with jeweller Karl Fritsch in Germany and New Zealand. She now works from her own studio at the Jam Factory.

Inglis is a material-based maker, who forms “significant relationships” between the material, hand and tool. For the past ten years her practice has focussed on the manipulation and transformation of a commonplace material, PVC, into something  precious.

The material is initially coloured then small pieces are removed from the surface through a process of hand-cut incisions and carved patterns to  glitter and reflect.

Her practice includes frequent exhibitions in national and international galleries and large-scale collaborative public art projects. She is  a member of the Craftsouth board and lectures in jewellery at the University of South Australia.

“Bloom and Blush,” at Bilk Gallery for contemporary metal and glass, Palmerston Lane Manuka, opens February 15, at 6pm and runs to March 23. 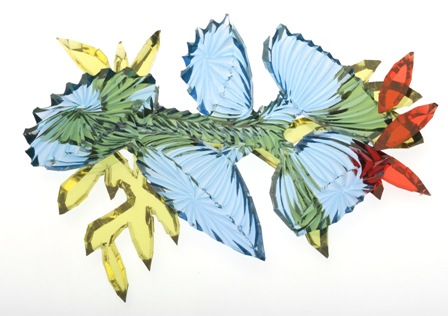