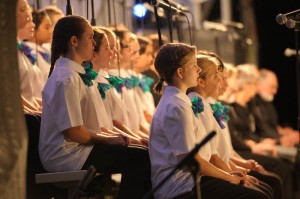 IT’S a difficult task to review a world premiere performance. There are no benchmarks or expectations. But if the audience reaction is any measure, then the Symphony No. 3 “Century” by Andrew Schultz was a resounding success, drawing a standing ovation, wolf whistles and prolonged applause.

Actually, one might think it was written much less for Canberra’s centenary than for the chief conductor of the Canberra Symphony Orchestra, for it matched perfectly Nicholas Milton’s energetic style. The orchestra responded magnificently.

Each of the three movements was introduced, unaccompanied, by the Centenary Choir, made up of the Woden Valley Youth Choir, the Oriana Chorale and The Resonants. The words, up on the big screen, did not reflect a particularly celebratory theme and the harmonies often were quite abstract, but the choir handled them superbly.

As for the orchestra, no-one got much in the way of rest bars. Everyone was kept very busy. And didn’t the players love it!

The music itself occasionally hinted at the all-too-familiar film-score style, so often heard in much of the modern “classical” music. However, it was packed with imagery, tension and mystery, always resolving with a musical sigh of relief.

One listener remarked that he was not much into symphonic music. “But,” he said, “I think it was excellent.” So, it seems, did the tens of thousands of others lining the lake shore.