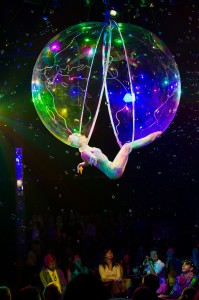 WITH its cast of beautiful girls and muscular, handsome men performing breathtaking world-class feats of remarkable daring and audacity, “Empire” certainly delivers in spades on its promise to smash the boundaries of circus, cabaret, vaudeville and burlesque.

A sense of danger, decadence and anticipation is quickly established as the audience enter the smoky, mirrored interior of the Spiegletent to be greeted by cast members dressed in exotic Andrew Strathie costumes, who pose, strut and flirt outrageously.

Soon the lights dim and a huge transparent bubble containing beautiful contortionist, Lucia Carbines, descends from the lavishly draped ceiling. Carbines gracefully manoeuvres her body into ouch-inducing positions among thousands of floating bubbles. Next a couple perform a quick-change costume act which draws gasps from the audience, and ends unexpectedly when someone forgets to pack the next costume, resulting in even bigger gasps.

Extraordinary sexy, clever, funny acts follow each other in quick succession. Each act is superbly staged, skilfully executed, and performed on a miniscule stage in the centre of the audience, heightening the sense of danger and eroticism, enhanced by musical soundscapes performed live by singer Casey Jamerson and guitarist John Shannon. The show climaxes with mesmerising balancing act involving 14 branches and a feather, which has to be seen to be believed.

Much of the humour certainly pushes the boundaries of vulgarity, and one felt for the hapless audience member coerced into participating at one stage, but if you’re up for a superbly presented, sophisticated and clever adult show, don’t miss “Empire”.