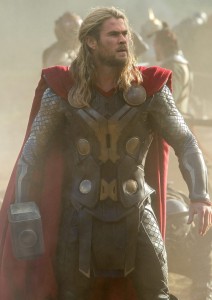 WE’VE seen it before and often. A bad guy with ambitions to steal a throne – in this case, it’s Loki (Tom Hiddleston), son of Odin (Anthony Hopkins), king of Aesgard). And a good guy, loyal to the cause of righteousness – that’s Thor (Aussie actor Chris Hemsworth) whose trademark is the hammer that he can summon into his hand when a really bad opponent needs demolition.

I won’t bore you with the corny joke about the pronunthiation of hith real name. He’s part of the pantheon of Norse gods that Marvel Comics has kidnapped to satiate the hunger of a filmmaking machine that shows scant respect for legend’s verity.

The screenplay by the two Christophers Yost and Markus for the sequel to Ken Branagh’s initial fantasy foray into the Thor screen legend is cut from dramatic cloth from which director Alan Taylor has created special effects not overburdened by novelty.

The plot jumps from ancient Norse myth to modern Britain where Jane (Natalie Portman), created for the Branagh film, awaits Thor’s summons to return to fantasyland, there to run terrifying risks until the other bad guy Malekith (Christopher Eccleston) comes to a juicy end.

In my youth, I enjoyed Ethel Wilmot-Buxton’s “Told By The Northmen”, for which the scholarship may have been less than complete but the author’s respect for the material was manifest. A film or two respecting the authenticity of the Norse myths would not be a bad thing. 21st century technology and cultural conditioning need not work against the box-office economics of such a venture. And it might redress the insult perpetrated here.

At Hoyts, Capitol 6, Dendy and Limelight

CityNews - February 20, 2020
0
Four in five Canberrans requiring urgent medical attention at the Canberra Hospital emergency department are not seen on time, according to the Canberra Health Services Half Yearly Performance Report.