And from Brisbane, “the Sparkling Sweetheart”, Lila Luxx, who “steals audiences’ hearts and then breaks them”.

Unlike the aformentioned, for anyone inclined to dressing up there will be a costume parade with prizes for best dressed. Tickets through eventbrite.

Blessed are those who pay for parking 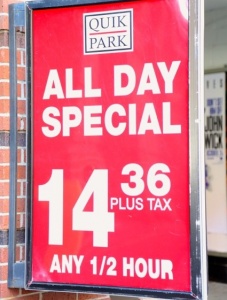 PUBLIC servants performing the unnatural act of putting coins in a parliamentary triangle parking machine should feel truly blessed at paying only $12 a day.

Pictured is an example of parking in New York sent from one of CC’s roving local snouts Chris Emery. Despite the eye-catching prospect of an all-day special of $14.36, a closer look reveals that’s for 30 minutes. Which makes the cost of a Government working day (say, 9am to 4.50pm) $US112.43, about $128.06 in our money and that’s before we get to the issue of tax! 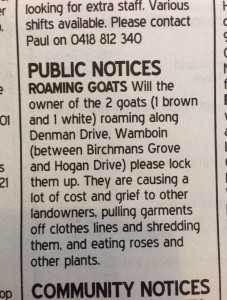 WHO says classified advertising is a lost art? This from the “Bungendore Mirror”.

WHILE on newspapers, here’s some news for “The Australian”: “Multimedia and breaking news out of Canberra from the website of Australia’s national daily newspaper, The Canberra Times,” says the pompous local fishwrappers’s Twitter bio.

AS if Christmas isn’t bad enough, we now have to contend with “Christams”, advertised on this sandwich board in Civic. Luckily there are gift vouchers available.

ELVIS lives and was spotted at the drive-through at Maccas at Dickson? Naw, it’s the Irish pub King O’Malley’s ute.