HISTORY is written by the winners, they say, and expatriate World War I historian Peter Barton is sick of it and plans to say so publicly at the War Memorial on Tuesday, July 1.

He will use the free public lecture to advocate historical research that actually compares our side’s version of events to the mountain of detailed records kept by the enemy, something he says had “simply never happened” before he did it recently.

“We don’t even look at the German side of things at all and what I’ve found is that Allied narrators and recorders have exaggerated and embellished and estimated to such an extent that it’s not valueless, but it has a greatly diminished value until you corroborate it with the German records,” says Barton, down the line from his UK home.

He says his latest book, which is published on the day of the Canberra lecture, does “something no other book has ever done, and that is to tell a corroborated story” about the battle of Fromelles on the Western Front, in which 5533 Australians were killed in 14 hours. It’s often called the worst day in our military history.

“What we’ve had for a hundred years now is one side of the story. Although the information from the German side exists and can corroborate what the Allies say, no-one has looked at their primary sources, and the Germans tell a very different story to the British and the Australians.”

Barton says his book contains a lot of groundbreaking new information about the fighting at Fromelles showing previous historians got the story wrong in lots of ways.

“For example the Australians did not adhere to their orders, that’s perfectly clear. In one part of the front they ended up with a line which was perpendicular to the one which they were ordered to take up. That’s not in any previous history.”

He says a popular view he once adhered to, that Allied commanders were incompetent, is also wrong. 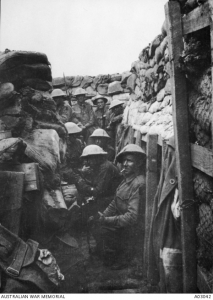 “[The officers] were not to blame, really. The Germans were to blame. They were just very, very well organised.”

It seems the Germans were better organised in data collection as well and did so more dispassionately. Barton says their “monumental” war archives are far more detailed than anything here or in the UK, allowing him to follow actions such as the battle of Fromelles literally minute by minute.

With the Centenary of World War I already upon us and not going anywhere for the next four years, the historian argues a wholesale revision of its history is “absolutely necessary”.

“I mean, I’ve looked at lots of other actions as well – tiny ones and bigger ones – and none of them seem to conform. You look at the Allied record and the German record and they’re very different; they tell a different story and in order for us to have a better form of truth then we must have this corroborated history. Without it we’re just fumbling around in the dark, really.

“I’ve been a World War I historian for a long time now and looking at the German records just tells me how little I know about it… they change your perceptions of the entire war.

“It’s as if for a century, we haven’t needed the German story, but once you start looking into it you realise how utterly essential it is to our understanding. We’ve got faulty perceptions of the operational side of World War I and it is the operational side that created the personal legacies that everybody commemorates today.”

“The Lost Legions of Fromelles” (Allen & Unwin) by Peter Barton is published on July 1.

Kate Meikle - February 26, 2020
0
"The first week of school felt like the longest of my life! I know I’m not alone in feeling the huge change to our family, all my mum friends have been checking in on how we are each managing the change as mothers," writes "Mummy" columnist KATE MEIKLE.