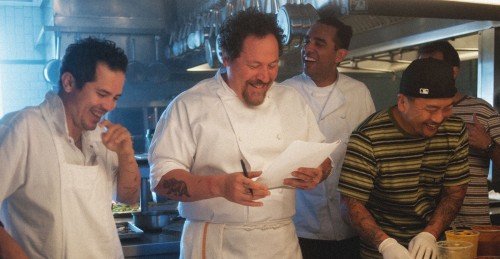 REGULAR customers come to the Los Angeles restaurant where chef Carl (writer/director Jon Favreau) has offered the same menu for a decade. Carl resists restaurant owner Riva’s (Dustin Hoffman) insistence that he change it. Reviewer Michel (Oliver Platt) savages his refusal to adapt. Carl’s angry tweeted response to Michel goes viral. After a major fall-out with Riva, he walks out.

Carl’s ex-wife Inez (Sofia Vergara) sends him to Miami to talk with her other ex-husband (Robert Downey Jr) about alternative employment, leading to the refurbishment of a food truck that Carl, his Los Angeles sous-chef Manuel (John Leguizamo) and his 10-year-old son Percy (Emjay Anthony) drive back to LA.

Manuel has based the truck’s fitout and menu on Cuban street food. As Carl, Percy and Martin drive it west, they attract crowds whose purchases finance the journey.

In a combination more frenetic than eclectic, the film combines family issues – Inez is dishy but no featherhead – with the influence (I call it pernicious but that’s a minority view) of social media, and the rather preposterous notion – perhaps not so much so, given the US propensity to obesity – that a chef of almost-haut-cuisine might find fulfilment in ethnic take-away based on fried sandwiches. The road movie feeling runs out of puff after New Orleans. And when Michel surfaces near the end seeking a slice of Carl’s action, it comes close to too contrived for comfort.

At Capitol 6 and Palace Electric