It was just sheer good fun. Set in the maze of an Egyptian tomb, complete with a bedraggled mummy terrorising the Indiana Jones-like Tamino (Jonathan Abernathy), Mozart’s perennial favourite, “The Magic Flute”, took us on a light-hearted romp, in English, through the familiar tale of the search for true love through trials and tribulation. 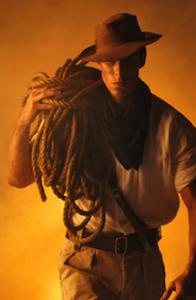 Paul Fitzsimon conducted a small chamber orchestra through a delightfully spirited interpretation of Mozart’s transparent but deceptively tricky score, giving just the right volume so as not to dominate the singers. The orchestra was a bit out of balance though; it could have done with a couple more violins (there were only two) and another viola (there was only one), just to counter the reeds and horns.

The singers were quite simply excellent. I wish I could mention them all. Diction, projection and pitch all were, to a person, spot on.  If there were any slips, I didn’t notice them. Acting was that delightful little bit over the top – perfect for Mozart’s writing, with tongue firmly implanted in cheek.

Hannah Dahlenburg, as Queen of the Night, was just as convincing as the queen should be, giving her character just the right touch of mystery.  Dahlenburg gave a brilliant performance of the famous aria “Hell’s vengeance boils in my heart”, effortlessly reaching those wonderfully high notes and hitting each note in the rapid sequences perfectly and with consummate ease.

The mischievous Papageno (Christopher Hillier) was, well, thoroughly mischievous.  He was engaging in his humour and his prancing around the stage and took the audience captive.

It was pleasing, too, to see the local connection, the Woden Valley Youth Choir, making such a professional and well-seasoned contribution to the performance.

Costumes were as interesting as the set, if something of an incongruous mish-mash. However, in a weird sort of way they fitted the overall theming of the production and certainly complemented the whole tongue-in-cheek approach.

Lighting, designed by Matt Scott, was imaginative; at times subtle while at others full on, but at all times well-measured. Effects, especially the storms and the fire and water trials were excellent, while the effect to introduce the silence trial was just a bit too subtle.

Set design, by Robert Kemp, was simple but effective. It did not change throughout the performance, but it was versatile enough to achieve all that was necessary for action, drama, humour. My only tiny gripe from row K was that I could see above the set into the scaffolding and framework and I found that a little distracting.

This production of “The Magic Flute”, directed by Michael Gow, performed on opening night before a full house, was simply a great night’s entertainment. It’s definitely is a show worth catching.