IN 1960s’ Poland, Anna (Agata Trzebuckowska) has lived in a convent since she was a baby. Soon, at the end of her teens, she will make her religious vows. Mother Superior tells her she has a living relative and sends her out into the secular world to meet this unknown aunt and evaluate the choice that suddenly confronts her. 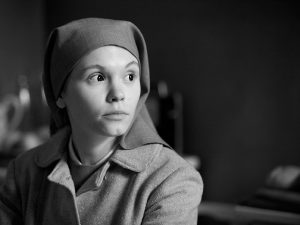 Aunt Wanda (Aguta Kulesza) is a class act. A lawyer, she has prosecuted law-breakers. As a judge, she has ordered punishment at every level on the penalty scale. She smokes, she drinks and she has uncommitted sex with strangers.

Her news overturns everything Anna knows about herself. Anna was born Ida Lebenstein, Jewish. Anna wants most of all to locate where her parents are buried. Wanda drives Ida to the farm that they once owned.

The film is a journey, along unmade roads among people whose behaviour is totally strange to the innocent young woman. Writer/director Pawel Pawlikowski shot it in available light only, using a digital process delivering monochrome images of remarkable delicacy. There is no musical score, only wild sound enhancing the effect of the film’s statements.

The film really belongs to Wanda whose life since Poland’s occupation by Nazi and Communist regimes has damaged her soul. At her funeral following the least-expected suicide you’ll ever see, the cortege sings not a hymn but “The Internationale”. And Ida confronts her destiny alone.