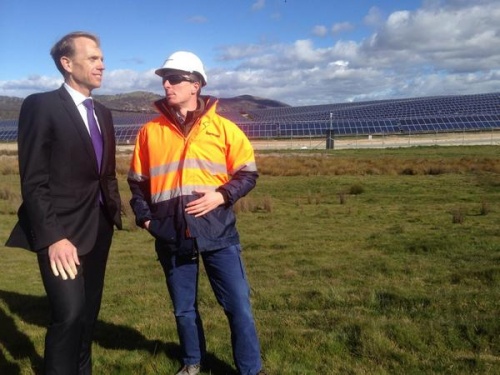 SIMON Corbell has joined the the Spanish Minister for Foreign Affairs to open the Royalla Solar Farm today.

“At 20MW the Royalla solar farm has twice the capacity of the Greenough River project in Western Australia and is the largest PV farm operating in the Australia. It is also the first large-scale solar facility connected to the national electricity market,” Simon said.

“It is expected to generate an average 37,000 MWh of renewable energy each year for the next 20 years and will meet the needs of 4,500 Canberra households.

The Minister of Foreign Affairs and Cooperation of Spain, The Honourable Mr Jose Manuel Garcia-Margallo, and the Ambassador of Spain to Australia, His Excellency Mr Enrique Viguera, attended the opening of the solar farm developed by the Spanish company Fotowatio Renewable Ventures.

“This target will do the heavy lifting in achieving the emission cuts needed to reach the territory’s legislated greenhouse gas reduction targets that require a 40 per cent cut on 1990 level emissions by 2020.

The cost to Canberrans of achieving 90% renewable energy is expected to peak at about $4 per household per week in 2020 before declining.

Simon says this will be offset by savings of about $4 per household per week from energy efficiency programs put in place by the government.