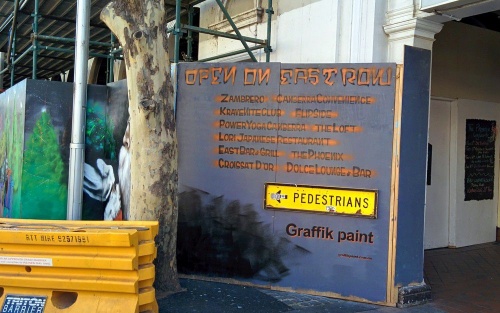 ONCE a vital bustling cog in the machinery of the City, Civic’s East Row increasingly looks like it belongs in third world war zone.

There is however some intervention with signage going up. The above example is particularly nice as it misspells the croissant in “Croissant D’Or” despite being not five metres from that magnificent pastry shop.

Meanwhile the torn up bus platform on the other side of the road advises patrons hoping to get to “Woden/Tuggy” that there is a temporary stop outsides Mooseheads. 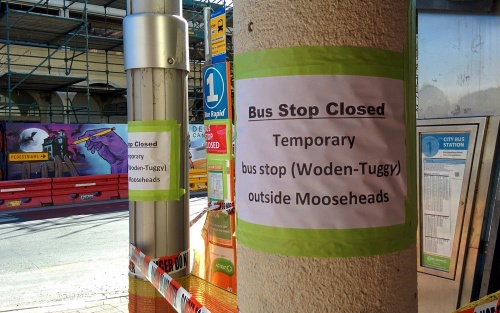 While your average hard drinking Canberran will be well aware of the Babylonian boozer around the corner on London Circuit newer arrivals to Canberra, particularly of a Culturally and Linguistically Diverse leaning, have been seen mouthing the unfamiliar “Moo-oose-heads?” in a confused fashion.

Meanwhile I came across this indicator of the long decay a couple of weeks ago. 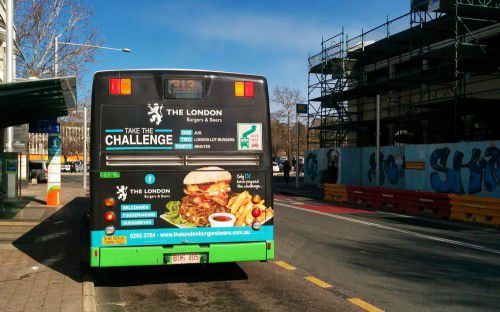 A bus advertisement for the London Burgers and Beers, parked in front of the burned out original store in Civic, now only mentions Belconnen, Tuggeranong, and Queanbeyan.