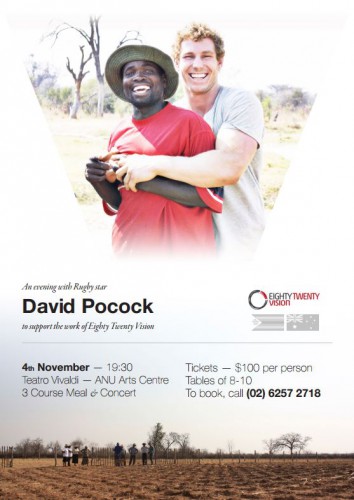 BRUMBIES and Wallabies star David Pocock is organising a fund raising evening for his native Zimbabwe.

David grew up in Gweru, in central Zimbabwe, until 2002. At that time his family left the country after some friends had been killed as part of Robert Mugabe’s disastrous land reform program.

Like a number of the white farmers evicted from their properties, the Pocock’s were able to escape, meaning that those left worse off by the land redistribution policy were the farm workers.

Eightytwenty Vision, was established by David Pocock and friend Luke O’Keefe to support, Nkayi- a town in central Zimbabwe. The work of the charity is varied but with a focus on health and education.

The concert, to be held on 4 November at Teatro Vivaldi Restaurant at the ANU is to raise money and support for the work of 80/20.