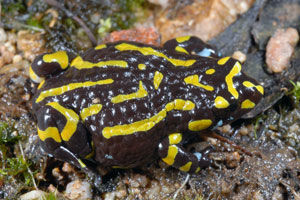 SIMON Corbell says recent surveys showing some corroboree frogs released in 2011 have survived and have begun their breeding calls is heartening.

“These results confirm that captive-bred frogs can survive for some years in the wild and re-establish breeding populations,” Simon said.

The frog survivors come from the first experimental release of corroboree frogs in 2011, when 200 juvenile corroboree frogs were placed back into the bogs where their parents were collected as eggs.

“Whether those young captive-bred frogs survived to breeding age could not be known for another four years, when the males begin calling as this is the only way the frogs can be found and counted.”

In 2003 the ACT Government established a captive breeding colony of the endangered northern corroboree frog at Tidbinbilla Nature Reserve, in response to continuing declines of wild populations.

There are currently about 600 northern corroboree frogs in captivity at Tidbinbilla which were collected as eggs, reached maturity in 2008 and successfully bred.

A key aim of the recovery program was to release corroboree frogs from Tidbinbilla back to the sphagnum moss bogs in Namadgi National Park, where ecologists hoped they would breed and develop natural disease resistance to amphibian chytrid fungus, which has been identified as one of the causes for the decline of frogs worldwide.

“Monitoring will continue over the next few years to determine survival rates of the frogs that have been released each year, and whether these frogs successfully breed in the wild,” Mr Corbell said.

The Northern Corroboree Frog was once abundant in Namadgi National Park but is now down to an estimated handful of individuals remaining in the wild. The frog lays only about 25 eggs each year.

CityNews - April 12, 2021
0
Police are concerned for the welfare of teenager Jack Hambilton who went missing about a week ago.