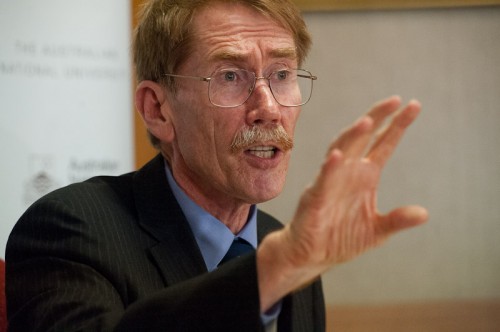 ANU’S Vice-Chancellor Ian Young has announced he won’t be seeking another term when his current appointment expires in February 2016.

ANU Chancellor Gareth Evans said that he understood and accepted Professor Young’s decision, given the quality and global relevance of his research interests as a world-ranking oceanographic engineer, but that his departure would be a great loss to the ANU.

“Ian Young has been an outstandingly successful Vice-Chancellor at a time of great turmoil and uncertainty in the tertiary education sector. He has been intensely strategically focused, and totally committed to maintaining and enhancing our national university’s stellar reputation in research, teaching and learning, and public policy outreach. I look forward to him maintaining a cracking pace in his last year with us, and he will have the full support of the University Council in doing so,” Professor Evans said.

Professor Young said he expected his next year at ANU would be very busy.

“In addition to my role as Chair of the Group of Eight and the critical passage of the Government’s Higher Education reforms, there are a host of development activities across the University, including the mid-term review and updating of the University’s Strategic Plan which need to be completed,” he said.

Professor Evans said the University would shortly commence an international search for a new Vice-Chancellor to replace Professor Young, which he hoped would be complete by mid-year in order to enable a seamless transition in February 2016.

CityNews - November 27, 2020
0
For the second time in two weeks, a diplomat has tested positive for COVID-19 in the ACT.