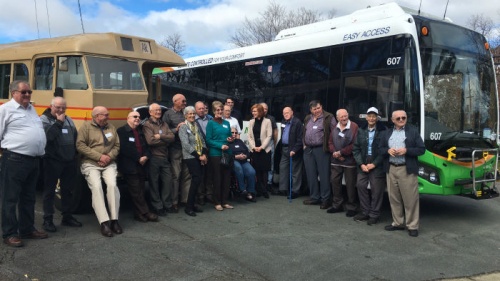 MEEGAN Fitzharris has joined Transport Canberra staff and members of the Retired ACT Transport Employees Club (RATEC) to celebrate 90 years of bus services in the ACT.

“Public transport in the ACT has come a long way in 90 years, and it is great to be able to celebrate this milestone at what is a really exciting time for public transport here in Canberra,” Meegan said.

“We recently launched our brand new transport agency, Transport Canberra, our new bus timetable launched yesterday, and construction on our light rail network has started, which I know will play a huge part in the next 90 years of public transport here in Canberra.

“Public transport has been an integral part of our city from its earlier days and it will continue to play an even more important role into the future with more than 500,000 people expected to call Canberra home in the next 15 years.

“In July 1926, the Federal Capital Commission started the first public operating bus service in Canberra, which was known as the Canberra City Omnibus Service.

“Parliament House opened the following year and a number of Commonwealth Government Departments began to move to Canberra. This led to an increase in people living in the ACT. To support this, the Omnibus Service grew the size and frequency.

“This service continued to grow and, by 1977, the Australian Capital Territory Internal Omnibus Network, known to most of us as ACTION, was formed.

“Looking back, a lot has changed. The city has grown from less than 10,000 people in the early days of the Canberra City Omnibus Service, to over 390,000 people today. Our buses now provide 3,306 weekday services, 1,186 services on Saturdays and 816 on Sundays. Technology has also improved with paper tickets replaced by the more efficient MyWay cards.

“These changes are certainly apparent in the difference between ‘Matilda’, the restored 1949 AEC Regal III Omnibus, and the Scania CB80, the newest of ACTION’s bus fleet, which is fully accessible, low emission and fitted with heating and cooling.

“Of course the next stage of our public transport journey will include light rail, and we will be working hard to ensure our buses integrate seamlessly with light rail when the first stage starts operating in early 2019.

“But what today is really all about is ensuring ACT residents continue to have access to quality public transport. T his is one of the ACT Government’s highest priorities, and I’m proud to be able to celebrate this milestone today as we look forward to making our public transport system work even better for the people of Canberra.”

As part of the celebrations for the day, Minister Fitzharris visited the RATEC clubhouse and viewed a range of ACT public transport memorabilia, including old driver shift cards, photographs, timetable books and signage. The Minster donated a new Transport Canberra MyWay card to the collection.