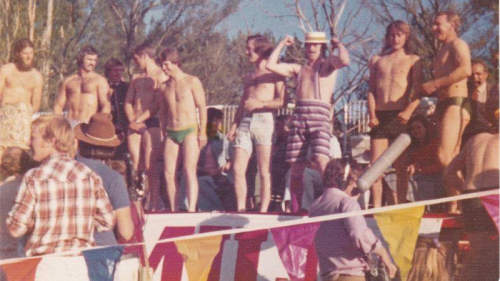 As our picture shows of the crowd-stopping, late ’70s men’s beauty pageant, it was a huge event for the little valley hamlet, 24kms out of Braidwood. In those days there was horse racing and the tug-of-war, and crowd-stopper from This year, the born-again organisers have invited axemen to compete with the lure of up to $5000 in prize money that they’ve scraped together from the community and with the support of the Braidwood community bank.

This year there will be whip cracking, the tug-of-war, the nail drive, a dog-jumping challenge and a pie-eating competition. This year will also see the Inaugural Araluen Ute show and shine. There’s no suggestion that the pretty boys will be parading.

It will be at the recreation ground on Saturday, October 1. Entry is $12 a family.

And the crisis? The devastating frost of October, 2014, wiped out 85 per cent of Helm’s estate grapes, which sent him searching for other cool-climate fruit in a district unaffected by the frost.

Justin Jarrett, a perfectionist viticulturist, had just the grapes on his vineyard, 700 metres above sea level, between Canowindra and Orange on the Central Tablelands.

From them Helm made his prize-winning Central Ranges (Orange) Riesling. And he hasn’t stopped buying the grapes since.

LABOR candidate for the Weston Creek/Woden electorate of Murrumbidgee Brendan Long may have a PhD from Cambridge, but his sense of spelling “doesn’t inspire much confidence” writes CC snout Pierre the Lair.

Despite the benefit of a Marist and ANU education, our aspiring MLA seeks to represent the electoral interest of the good burghers of “Western Creek”, wherever that is (there’s one in Tasmania, if that’s any help, Dr Long).

Enter Meegan, who was straight on to it: “Oh Alistair, you’re wearing a red tie!”

To which all eyes turned to her attractive blue scarf. Was that a red blush, minister?

The energy of experience

NATIONAL Trust council member Graham Carter was musing after the ACT council’s election heritage forum last week that, with 100 people in attendance – representing the National Trust, several of the Community Councils, most of the residents’ associations and other heritage/history bodies and individuals, particularly from the inner suburbs – that each of them would have at least 20 years’ knowledge and experience, which in total equates to about 2000 years.

“How can this energy and passion be harnessed more effectively?” Graham rather prosaically ponders.

“There was a great deal of discussion about ‘consultation’, but there seems to be a feeling that we need to move beyond that to another (more advanced?) paradigm, that is built on greater co-operation, trust and respect.”

IS there an irony they’ve missed in this: Australia Post is calling on children to support October’s Stamp Collecting Month. Stamp collecting? This from an organisation that made “snail mail” a self-fulfilling prophecy as it actively pares back its delivery times (and stamps sold).

Though eerily prophetic also is that AP’s encouraging children to learn more about animal conservation through its new “Endangered Wildlife” stamp issue. But there’s no stamp in the series for the equally endangered Australia Post.

Paul Costigan - March 2, 2021
0
"At the core of the Coolo Park fiasco is how an unresponsive bureaucracy controls the ACT’s politicians at the expense of common sense, community aspirations and the future of this city in a landscape," writes "Canberra Matters" columnist PAUL COSTIGAN.