NEW research has found digital touch-screen technology and interactive games improve the quality of life for orangutans and chimpanzees in captivity. 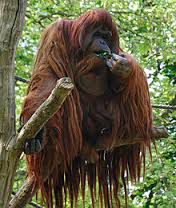 It was there that she tracked the attitudes of visitors who watched and interacted with the animals by using the digital programs.

Kim-McCormack says the intelligence of chimpanzees and orangutans mean they can often get bored in a captive environment.

She says: “This kind of enrichment program can give them a higher quality of life. It allows them to be challenged in a new ways.”

The apes were given a choice from a range of digital activities, including one where zoo visitors would draw picture and then show them to the orangutans on the screen.

“The amazing thing we saw was that the chimps and orangutans realised that they were interacting with the visitors through the program,” Kim-McCormack says.

“They got that concept, it was great to see both the animal and the visitors connecting in a special way.

“Some may be concerned that it’s not natural, but this may be a human bias that all animals should reflect their wild counterparts.

“We are trying to get results that show it does benefit the animals and it’s something that zoos and sanctuaries should consider.”

Kim-McCormack has presented her preliminary results at the “International Primatological Society and American Society of Primatologists 2016 conference”.

0
On learning that the running time for "Waves", a film about an African-American family, is 135 minutes, you might be forgiven for approaching it with reservations and a little caution. Don’t do that, advises reviewer DOUGAL MACDONALD.