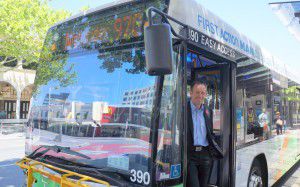 THE ACT Greens have announced a major upgrade to Canberra’s bus fleet – pledging $132 million for more clean energy buses. The announcement follows a $57 million commitment from the Greens to improve Canberra’s bus network.

“Transport is a major part of our plan to put the community first. The Greens will invest in more public transport, and power our buses and light rail with clean, green energy,” Shane Rattenbury said.

“The buses we buy today will still be in use in 2030, when we hope to have transformed the ACT into an entirely clean energy powered and carbon neutral Territory.

“Now that we’re on track to achieve 100% clean electricity by 2020, transport is Canberra’s next big pollution challenge. We’ll begin trialling electric, hybrid and clean biodiesel buses straight away, and then transition our fleet away from fossil fuels.”

“No other party is taking action on transport pollution. Only the Greens have a plan for clean, green, buses combined with a light rail network powered by clean energy – turning Canberra into Australia’s clean transport leader.

“Transport is a major source of pollution. That’s why we will invest $130 million to buy new, fossil-free buses and trial new bus technologies.

“Not only are Canberrans stuck in traffic and spending too long behind the wheel trying to get around the city, but our car-dependence is costing Canberra families too much in fuel, it’s contributing to our city’s air pollution and it’s driving dangerous global warming.

Danielle Nohra - May 12, 2021
0
WHEN a video went viral late last year of a cyclist being knocked off a bike by a trailer, Pedal Power ACT discovered a major issue with the law, reports DANIELLE NOHRA.