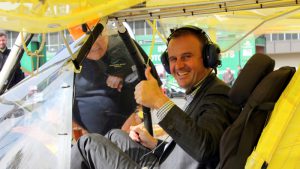 ANDREW Barr says a re-elected ACT Government will fund a program of grants to support arts festivals, arts participation and access to the arts in Canberra.

"ACT Labor has plan to make the world’s most liveable city even better and a strong local arts industry is a vital component of Canberra’s cultural life, international reputation, and economy," Andrew said.

"ACT Labor understands this, which is why we so strongly support the Canberra art scene and its artists.

"A re-elected ACT Labor Government will provide additional ongoing funding of $750,000 per year for the arts grants program. We will also provide $105,000 over three years to fund the ongoing work of Kulture Break.

"The majority of the $750,000 per year in additional funding will be made available each year to support one-off grants for Canberran artists.

"The funding allocation to Craft ACT will support the continuation of DESIGN Canberra – a nine day festival of innovative craft and design-inspired events, exhibitions and forums across Canberra. Successful DESIGN Canberra Festivals were held in 2014 and 2015 and ACT Labor will proudly support the return of this festival to the Canberra arts scene.

"Art, Not Apart is a key part of ACT Labor’s arts agenda and reinforces our long-term ambition to be an internationally recognised centre for art. Canberra is a cool little capital, and this cool little festival centred around New Acton and Westside will be provided financial support into the future by ACT Labor if re-elected.

"ACT Labor’s commitment to Art, Not Apart stands alongside our already announced support for a number of arts initiatives including Screen ACT, the Canberra Writers Festival, the Canberra Theatre Centre, our wide network of Arts Centres and the newly-announced Canberra Arts Biennale.

"ACT Labor will also seek to encourage a dynamic entertainment culture in our city by strengthening the ACT live music scene. ACT Labor wants a strong night time economy – and providing more opportunities for live music performances is one way to achieve this.

"The Urban Sounds discussion paper was published by the ACT Government in August 2016. This paper acknowledges that as Canberra grows, there is a need to balance night time entertainment activities with the rights of people nearby.

"Urban Sounds outlined 11 options for public comment. ACT Labor commits to using the public feedback on these options to inform changes to the planning framework, while also maintaining a balance between the needs of those who live in mixed use areas and the businesses, entertainment venues and services located in those areas.

"Kulture Break is committed to the wellbeing, transformation and empowerment of young people by engaging young people in a safe, active and productive environment using dance as a form of personal expression.

"Only ACT Labor’s commitment to the arts scene in Canberra is long-lasting, strong and genuine. Only ACT Labor can provide the support the arts sector needs into the future."