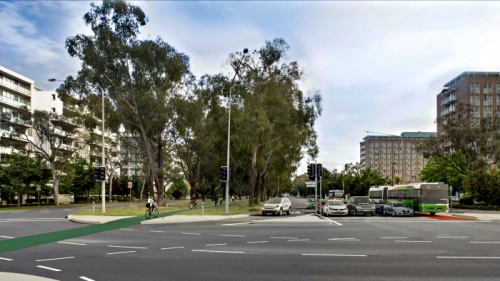 ALISTAIR Coe says a Canberra Liberals Government will deliver a rapid transit corridor and additional road capacity on Northbourne Avenue, the Federal Highway and Flemington Road that will be faster than trams, at a fraction of the cost.

“Our common sense solution involves dedicated bus infrastructure, safe cycle lanes and additional road lanes that will combine for seamless and efficient transport. With the infrastructure we’re proposing, express buses will travel from Gungahlin to the City in 17 minutes, almost 10 minutes faster than trams,” Alistair said.

“These exciting plans include:

“Our current plan is for the bus lanes on Northbourne Avenue to be kerbside; however, a Canberra Liberals Government will seek expert engineering advice as to whether a median aligned bus lane would be a better option. Regardless of the alignment, the dedicated bus lanes will allow for less than 30 minute commutes by bus at peak hour from every Gungahlin suburb.

“The Canberra Liberals would seek to task the Canberra Metro Consortium to undertake this work, rather than a tram. We’re budgeting $58 million for these works, which includes a significant contingency.

“This comprehensive infrastructure plan for the Northbourne corridor will save the ACT over a billion dollars and provide a better transport solution,” Mr Coe concluded.

Reaction has been swift from Labor’s Meegan Fitzharris:

The Canberra Liberals’ plan to concrete Northbourne Avenue will turn it into an eight-lane gridlocked highway, at a cost of hundreds of millions.

Concreting Northbourne Ave so more people can sit in a traffic jam would take the ACT backwards.

The plan announced today would allow for nothing more than a conga line of buses clogging up the city’s main entry road, which won’t even stop to pick up passengers along the route. It is a bandaid solution that will fix nothing but cost a fortune.

The travel times floated are simply impossible, especially when the extra lane runs out at Flemington Road.

Their plan does nothing for Flemington Rd except add more congestion at its northern end, with their conga line of buses clogging it up. Labor’s light rail will free up Flemington Road for all users.

Today’s announcement also includes the ridiculous notion that an international light rail consortium would agree to lay concrete and build bike paths instead. It is like asking someone who is building your house to build you a car instead.

This morning the Liberals’ transport spokesman even admitted on ABC radio that their costing for concreting Northbourne Avenue was a guess.

The Liberals must immediately provide their ‘costings’ to Treasury to reveal the full cost of their plan, including cancelling the light rail contract.

They must also confirm that they have received NCA approval to concrete Northbourne Ave, with no hope of replanting any of the trees that would have to be removed.

As we celebrate opening our city to the world today through direct international flights, the Liberals are scurrying around trying to gridlock our city.

The Canberra Liberals have again demonstrated that they have no clue how to procure, manage or deliver large infrastructure projects.

ACT Labor’s plan for an integrated transport network delivers a dedicated right of way for public transport, frees up the cycle lanes and the road network, reducing congestion and improving travel times for everyone.

The Greens’ Shane Rattenbury is also not a fan of these plans:

“After telling months of lies about light rail and offering no solutions, this is the best the Canberra Liberals could come up with – more congestion and more traffic for Canberra,” said Mr Rattenbury

“The Canberra Liberals’ plan for congestion will cost taxpayers hundreds of millions of dollars in contract cancellation costs if they scrap the light rail. It will put more cars on the road – not less – and they will chop down the trees along Northbourne that they claimed to care so much about.

“The choice at this election is clear – our plan for light rail, more buses, and 1,800 new trees on Northbourne Avenue, or the Canberra Liberals who want wall-to-wall traffic and congestion from the City to Gungahlin.

“Building more roads to deal with congestion is like loosening your belt to cure obesity – it doesn’t work and will lead to more cars and more traffic.

“Canberrans shouldn’t have to spend more time stuck in traffic each morning. They should have fast, convenient public transport to help get around our city. The Canberra Liberals haven’t got the vision or the guts to deliver what Canberra needs,” Mr Rattenbury said.